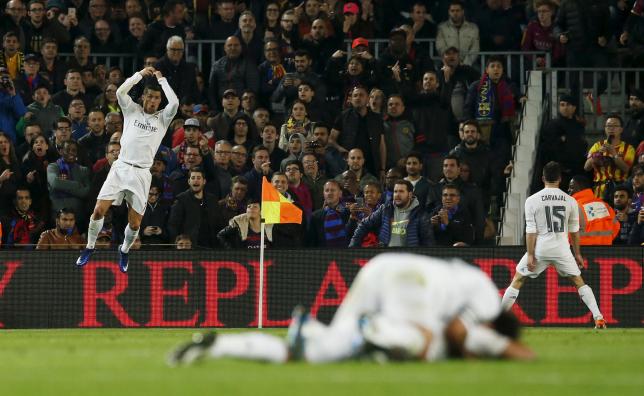 Real Madrid's Cristiano Ronaldo celebrates scoring their second goal. Reuters
BARCELONA: Cristiano Ronaldo struck late to give Real Madrid a 2-1 victory in the 'Clasico' and ruin Barcelona's 39-game unbeaten run in a tense game overshadowed by debatable refereeing decisions on Saturday. Gerard Pique headed in a corner to give La Liga leaders Barcelona a deserved lead after 56 minutes but Karim Benzema's acrobatic volley levelled for the visitors who were lucky to avoid conceding a penalty in the first half. Real captain Sergio Ramos was also fortunate to escape with a yellow card from referee Alejandro Jose Hernandez in the second half although the defender was eventually sent off in the 83rd minute. Hernandez also ruled out a headed goal by Gareth Bale. Barcelona failed to capitalise on their numerical advantage in the closing stages and went 2-1 behind in the 85th minute when Ronaldo chested down a high cross from Bale and fired the ball in at the near post. "Winning here is a huge prize for all our players because they put in an enormous performance," Real coach Zinedine Zidane told a news conference after handing Barca their first defeat in any competition since February 2015. "I'm very happy because it’s not easy to win here, few teams win here." Barcelona have 76 points with seven matches to play, seven ahead of third-placed Real. Atletico Madrid are six points off the pace after Antoine Griezmann hit two goals in their 5-1 rout of Real Betis. Fernando Torres, Juanfran and Thomas Partey also netted for Atletico. Real's win was their first in the league at the Nou Camp since 2012. It was also Barca's first home defeat since they were beaten 1-0 by Malaga in February 2015. RAMPANT START "It's painful to lose at home but it had to happen some day," said coach Luis Enrique. "I'm happy with the attitude of our players if not the result. We could have won, or drawn, but Madrid were effective at the end." Barca made a rampant start and Luis Suarez missed a glaring chance in the 10th minute. They could also have had a penalty midway through the first half when Lionel Messi fell over Ramos' trailing leg after a mazy run into the box. Despite Barca's dominance they needed a corner to find a way through, Pique escaping marker Pepe to head in at the near post. Real responded in the 62nd minute when Marcelo weaved his way into the area from the left and gave the ball to Toni Kroos whose deflected shot sat up for Benzema to athletically score his 21st league goal of the season. Elsewhere, Valencia were beaten 2-1 at mid-table Las Palmas in coach Pako Ayestaran's first game in charge since succeeding the sacked Gary Neville. Rodrigo put the visitors ahead after two minutes but a penalty from Jonathan Viera and an own goal by defender Shkodran Mustafi handed 15th-placed Valencia a fourth straight defeat.
#Barcelona #Cristiano Ronaldo #Real Madrid
You May Also like: