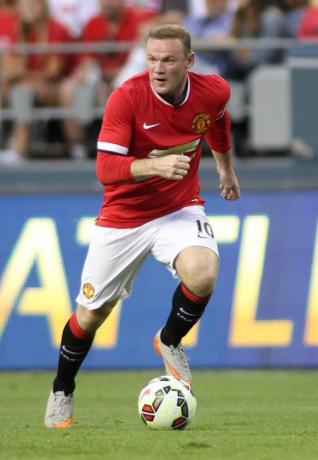 Manchester United's Wayne Rooney. Reuters  [/caption] LONDON: Wayne Rooney has set himself a target of 20 goals this season, which would break Bobby Charlton's long-standing record as Manchester United's highest scorer of all time. Rooney is already within one goal of United legend Charlton's England scoring record of 49. Now, having been told by United manager Louis Van Gaal that he will be used in his favourite position as an out-and-out attacker, he is hoping to score 20 in all competitions to reach 250, overhauling Charlton's tally of 249 for the club from 1956 to 1973. "My best position -- and I've always said it -- is as a striker, getting into the box," Rooney told reporters from British media on United's tour of the United States. "The two seasons I've really done that as a lone striker are my two best goal scoring seasons," he added. "I hope to score 20 or more goals again. If I'm playing as a striker, then I will be disappointed if I can't do that again. "I've played different roles over the years for United but you only have to look when I play for England as a striker, I score goals." Rooney's 230 goals have come in 473 games, as opposed to Charlton's 748 matches. Denis Law, who scored 237 times in only 404 games, is currently second on United's all-time list.

#Wayne Rooney #Manchester United #Bobby Charlton
You May Also like: