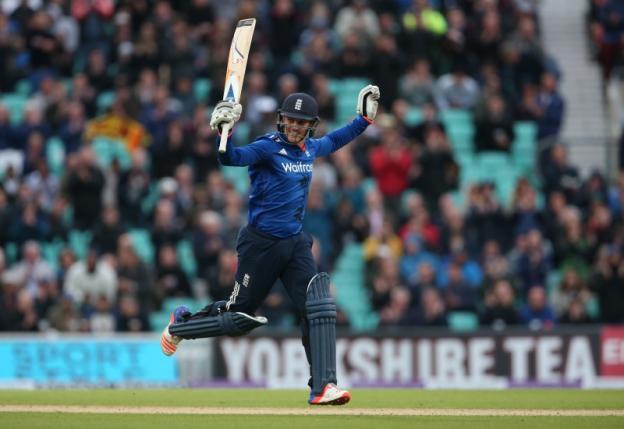 England's Jason Roy celebrates his century. Reuters
Jason Roy made a brilliant 162 to lead England to a crushing six-wicket victory over Sri Lanka in the fourth one-day international at The Oval on Wednesday. Roy fell five runs short of England's highest one-day score, Robin Smith's 167 against Australia in 1993, but the hosts eased to a revised target of 309 with 11 balls to spare to seal the five-match series with a 2-0 lead. Sri Lanka scored 305 for five from 42 overs after being put in to bat thanks to half centuries by Dhanushka Gunathilaka, Kusal Mendis, who top-scored with 77, Dinesh Chandimal and Angelo Mathews. Their innings was interrupted by rain, however, and England faced a target of 309. Roy was in prime form and, after Moeen Ali fell early, he struck three sixes and 13 fours from 118 balls in a superb exhibition of stroke-making. Joe Root made 65 in a welcome return to form before Jonny Bairstow and Jos Buttler guided England to their second highest successful run chase in one-day cricket.
#England #Sri lanka #Jason Roy
You May Also like: