Serena wastes no time putting Babos behind her 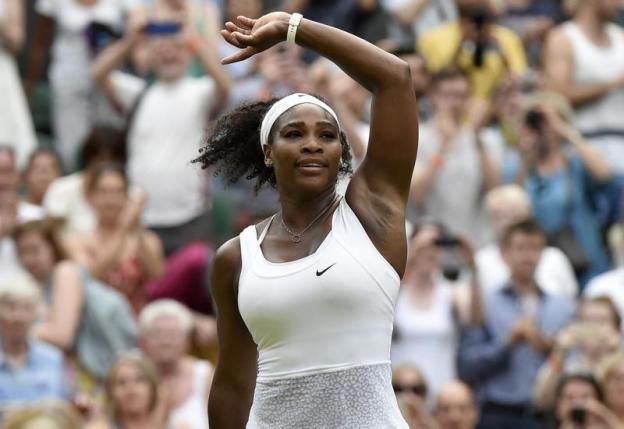 Serena Williams of the U.S.A. celebrates after winning her match against Timea Babos of Hungary at the Wimbledon Tennis Championships in London, July 1, 2015. REUTERS
LONDON: Top seed Serena Williams had to wait to get on Centre Court but then wasted no time in sweeping aside big-serving Hungarian Timea Babos 6-4 6-1 inside an hour on Wednesday to reach the Wimbledon third round. Following on from an epic five-set men's match between Marin Cilic and Richard Berankis, the world number one and five-times Wimbledon champion was in no mood to hang around despite the occasional lapse. The American broke her 93rd-ranked opponent in the opening games of both sets, wrapping up the first in 34 minutes after rattling seven aces, and never looked in danger despite having to salvage two break points in the fourth game of the second. She saved the second break point with an ace and then blasted down another to go 3-1 up. "I'm definitely playing well," Williams said as she came off court after 59 minutes following a second 6-4 6-1 win in a row. "I had to pick up my game today. She has such a huge serve." Babos gave an early taste of her firepower with an ace on her first serve of the match but then double-faulted at 30-15 before saving two break points and then conceding the third. Williams's next opponent will be Heather Watson, the only British woman to reach the second round, who beat Slovakia's former world number five Daniela Hantuchova 6-4 6-2. "I don't know her (Watson) at all, I just see her around the locker room," said Serena at a news conference interrupted by fire alarm announcements. "She's always smiling so she seems to be super sweet. "I know Venus has played her before. I've watched that match a few times. I feel like she does really well on grass," added the American, who went out in the third round last year to Frenchwoman Alize Cornet. "She's doing well on grass, had a really good win today. So I know it's not going to be easy for me. She has nothing to lose. She's going forward."
#Wimbledon #Serena Williams #Timea Babos
You May Also like: