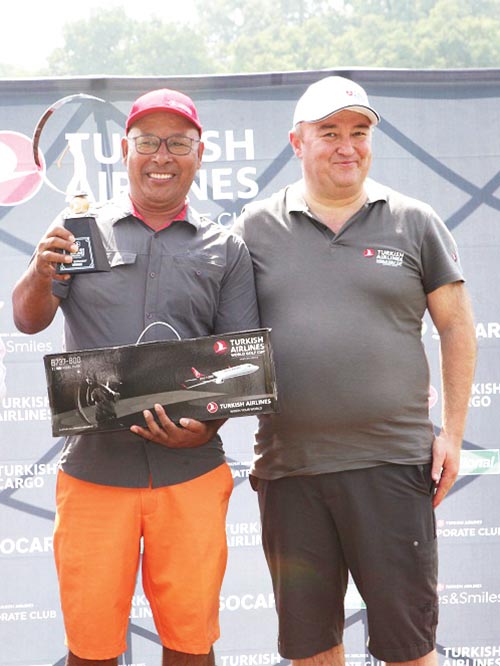 Babu Sherpa holds the trophy as General Manager of Turkish Airlines Abdullah Tuncer Kececi looks on after the Turkish Airlines World Golf Cup Kathmandu Qualifier at the Gokarna Golf Club on Saturday. Photo: THT
Kathmandu, May 11 Babu Sherpa won the Turkish Airlines World Golf Cup Kathmandu Qualifier here at the Gokarna Golf Club today. Sherpa finished first on count back after he was tied on 42 points with Ola Tenzing. The 10-handicap golfer, Sherpa managed 19 points on the front nine before scoring 23 on the back nine, while Tenzing, who played with allowance of 18-handicap, earned 18 on the last nine holes after scoring 24 points on the front nine. With the win, Sherpa earned berth for the Turkish Airlines World Golf Cup to be held in Turkey in November. He will join the winners of 102 tournaments played in 72 different countries in the final in Antalya. The winner of the World Golf Cup in Antalya will get the opportunity to participate in the Pro- Am tournament of the Turkish Airlines Open, the European Tour event. Pemba N Sherpa came third, also on count back after being tied on 41 points with Rajat Rana and Lt Gen KNS Thapa. The second runner-up was decided on the count of last six holes between Sherpa and Rana as they had scored 19 points each on the back nine. Sherpa finished third with the last six-hole score of 14 points edging past Rana by one point. Lt Gen Thapa was out of the race as he had scored 17 points on the back nine. Tashi Tshiring won the gross section award with the 38 points and received the special trophy kept in memory of golfer and tourism entrepreneur Ang Tshiring Sherpa, who died in a chopper accident in February. In women’s section, Kashmira Shah finished first with 39 points. Rekha Ghimire came second on count back after she was tied on 31 points with Kalyani Moktan. Ghimire scored 15 on the back nine, while Moktan had 14 points. Mithun Rai and Rekha Ghimire won the closest-to-the-pin awards in men and women sections respectively. Captain Norbu Lama won the Turkish Airlines return ticket to Antalya in a lucky draw held for the participating golfers. A total of 101 golfers took part in the event which was played under stableford format with a maximum of 18 handicap allowance. General Manager of Turkish Airlines Kathmandu Abdullah Tuncer Kececi, Sales Manager Benazir Shrestha and Airport Manager Reshu Singh gave away prizes to the winners. Captain of Gokarna Golf Club Joseph Nathan lauded the efforts of Turkish Airlines in the development of golf and also handed over the memento to Kececi.
#Gokarna Golf Club #Babu Sherpa #Turkish Airlines World Golf Cup Kathmandu Qualifier
You May Also like: