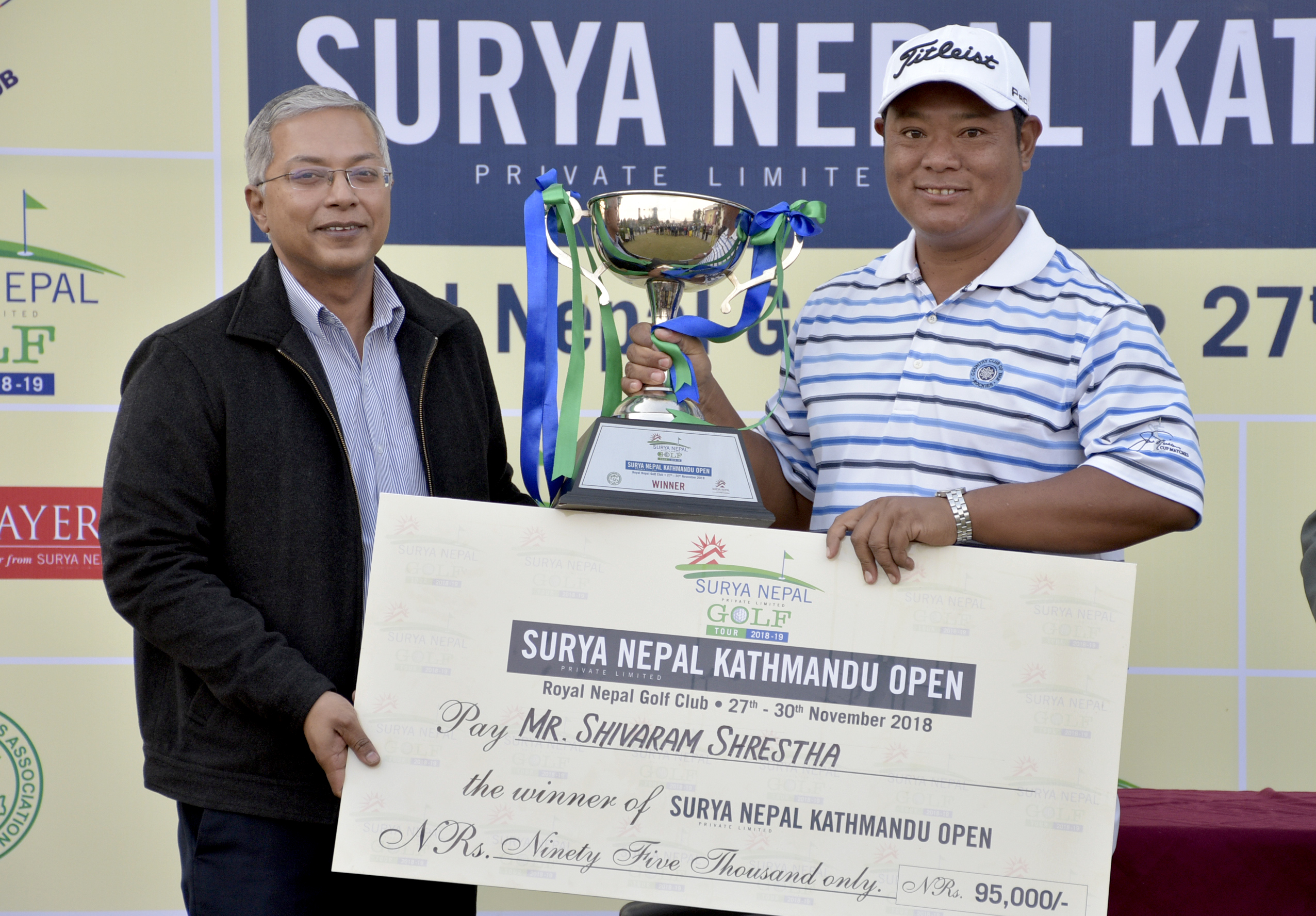 Shrestha, who also won the season-opening Surya Nepal Central Open last month at Gokarna, carded even-par 68 to post the 72-hole score of 11-under 261 in the second event under the Surya Nepal Golf Tour 2018-19. With the second straight title of the season and 43rd career trophy, Shrestha received Rs 95,000.

The RNGC pro had a six stroke going into the final round and he played one-over 35 on the front nine before carding one-under 33 on the latter half. He began the day with a bogey and added another on the seventh after earning a shot on the fourth. After taking the turn, Shrestha carded birdies on the 11th and 13th before dropping a shot on the 15th hole.

Bhuwan Nagarkoti made a remarkable comeback carding a five-under 63, the best card of the round that included eight birdies, to move five places up to second with the total score of five-under 267. Defending champion Nagarkoti took the turn at three-under 31 and carded two-under 32 on the back nine.

The pro from Gokarna Golf Club began the day with a birdie and dropped a shot on the fourth before firing three more birdies on the fifth, sixth and eighth holes. After taking the turn, Nagarkoti carded four more birdies on the 10th, 13th, 14th and 17th but faced bogeys on the 15th and 18th holes. He earned Rs 65,000.

Army Club pro Dhana Bahadur Thapa finished third at four-under 268 after he played a round of one-over 69 and received Rs 55,000. He took the turn at even-par 34 where Thapa carded bogeys on the first and sixth against birdies on the fourth and ninth holes. On the back nine, Thapa faced a bogey on the 14th hole.

In amateur section, Sukra Bahadur Rai registered a five-shot victory over fellow national team member Tanka Bahadur Karki. The Dharan golfer, Rai played one-over 69 for the total score of four-under 68 and he was tied for third with Dhana Bahadur Thapa in the overall standing. Karki (71) came second at 273, while Subash Tamang (71) finished third at 276.

In all 41 golfers — 33 pros and eight amateurs — took part in the tournament organised by Nepal PGA under the sponsorship of Surya Nepal Pvt Ltd. The event carried a total purse of Rs 525,500. Surya Nepal Vice-President - Sales and Marketing - Dipra Lahiri, NPGA President Rabindra Man Shrestha and President of Nepal Golf Association Tashi Ghale handed over the prizes to the winners.