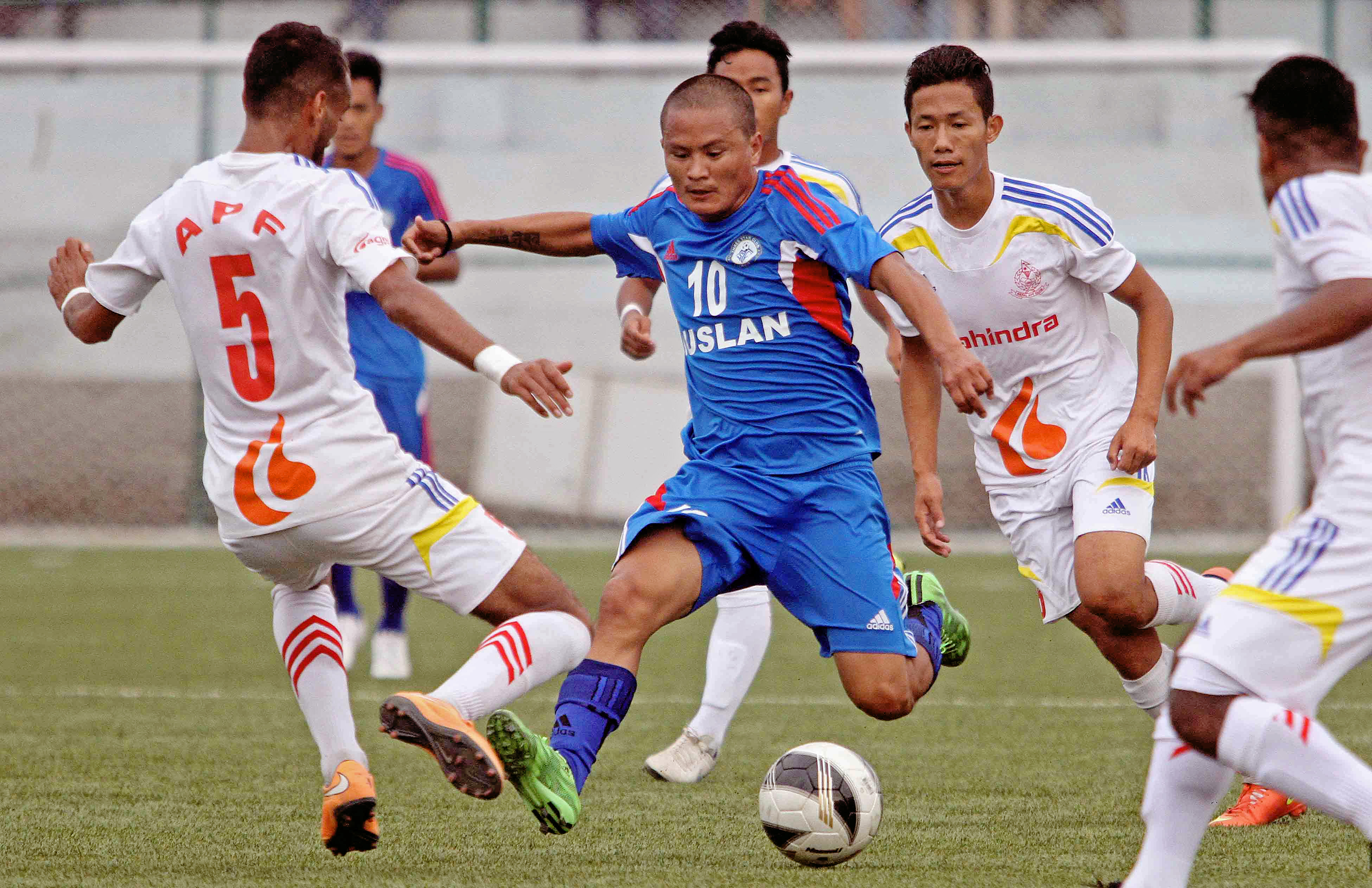 Jagjit Shrestha (center) of Three Star Club dribbles the ball against Nepal APF Club players during their Red Bull National League match at ANFA Complex in Lalitpur on Tuesday. Courtesy: Udipt Singh Chhetry
Lalitpur, September 15 Ruslan Three Star Club (TSC) thrashed Nepal APF Club 4-1 to climb to second position of the Red Bull National League here at the ANFA Complex grounds today. Jagjeet Shrestha scored a brace, while Bijay Gurung and Segun Eyityato netted one each for Three Star. Heman Gurung scored the consolation goal for APF. TSC jumped four places up to second with 14 points from seven matches, while APF, who also have 14 points, dropped to third on inferior goal to the Patan-based club. The players observed a minute of silence before the match, while Three Star team members wore black arm band in memory of Club President Lalit Krishna Shrestha, who was also the acting president of All Nepal Football Association. This was Three Star’s first match since Shrestha was electrocuted at his residence on June 12. TSC took an early lead through the goal of Eyityato in the 10th minute when he struck home from close range following a pass from Afeez Alawale. APF levelled the scores in the 28th minute when Heman Gurung converted the free kick from 35 yards as TSC goalkeeper Kiran Chemjong let the ball into the nets through his hands. TSC restored the lead in the 37th minute when Shrestha slammed home from six yards and Bijay Gurung made it 3-1 scoring from close range following a pass from Bikram Limbu. Shrestha scored his second and fourth goal of the team in the injury time from a set piece. Three Star earned a free kick just outside the box and Shrestha’s curling shot found the net. Shrestha was named the man-of-the-match. TSC coach Rajendra Tamang, who took over the job after Anjan KC quit on Sunday, was happy with the result. “Most of the boys are from national team and I do not need to teach them how to play football,” said the coach. “I had asked them to play their natural game and we came up with a convincing victory,” he added. APF coach Krishna Thapa was also happy with the performance of the players. “Boys worked hard in the match but they could not convert the chances. Three Star controlled the match and scored at regular intervals. We still have matches to play and we are hoping to go up in the table,” he added. On Wednesday, Jagdamba Lumbini Football Club will take on Far-western Football Club at the ANFA Complex, while Morang FC face Jhapa FC in Morang.
#Nepal APF Club #ANFA Complex grounds #Red Bull National League #Ruslan Three Star Club
You May Also like: