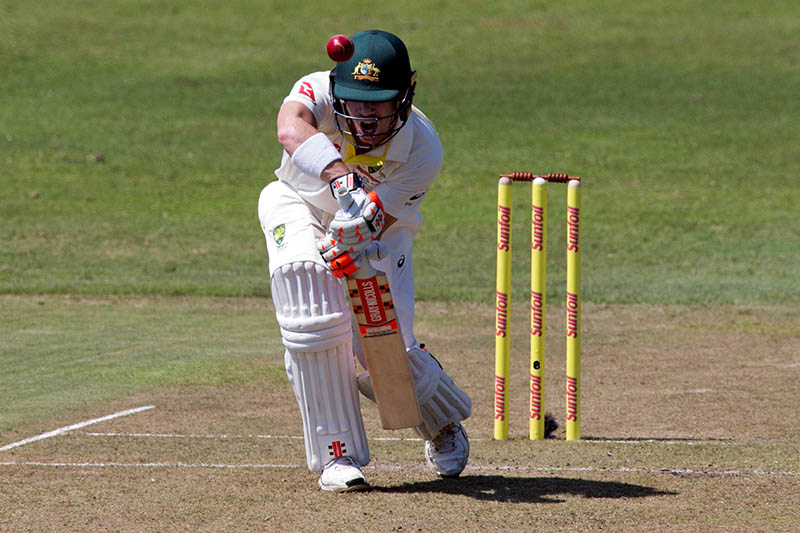 Australia's David Warner plays a shot. Photo: Reuters
DURBAN: Australia captain Steve Smith won the toss and chose to bat in sunny conditions at Kingsmead on the opening day of the four-test series against South Africa on Thursday. The series is being set up as a battle between two highly-rated pace attacks but the Durban wicket is likely to be slow on a hot and humid day with Smith saying he hoped to put together a big first innings total. Australia have picked the same team that won the final Ashes test in Sydney, with Smith announcing his side some 24 hours before the first ball. "I feel like I've been batting well since we've been here," said Smith, who was prolific in the Ashes series against England. "Hopefully I can stand up again and lead the boys and get myself in that zone again to have the success against a good bowling attack. "Everyone is excited about this series, it's going to be a cracker." Counterpart Faf du Plessis said had he won the toss he would also have batted first as South Africa opted to go with seven batsmen rather than the six they used in the 2-1 series win over India in January, bringing in Theunis de Bruyn in the middle order. Du Plessis said they expected a run-filled test. "If we can put runs on the board, we know with our bowlers, we can put pressure on them," he said. Teams: South Africa: Faf du Plessis (captain), Dean Elgar, Aiden Markram, Hashim Amla, AB de Villiers, Theunis de Bruyn, Quinton de Kock (wicketkeeper), Vernon Philander, Keshav Maharaj, Kagiso Rabada, Morne Morkel Australia: Steve Smith (captain), David Warner, Cameron Bancroft, Usman Khawaja, Shaun Marsh, Mitchell Marsh, Tim Paine (wicketkeeper), Pat Cummins, Mitchell Starc, Nathan Lyon, Josh Hazlewood.
#Australia #South Africa #Steve Smith #Faf du Plessis #Theunis de Bruyn
You May Also like: