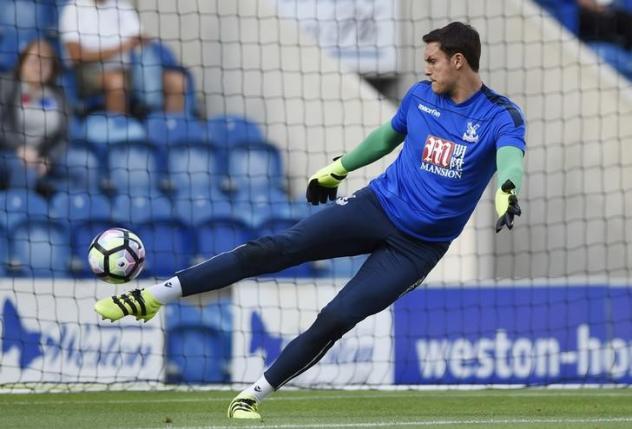 Crystal Palace's Alex McCarthy warms up before the game. Reuters
Southampton have signed French right-back Jeremy Pied on a free transfer following his departure from French side Nice and added Crystal Palace goalkeeper Alex McCarthy for an undisclosed fee. The 27-year-old Pied, who has signed a two-year contract, is reuniting with manager Claude Puel for the third time having already played under him at Nice and Olympique Lyon. "The signing of Jeremy confirms the commitment of Southampton to succeed again in the Premier League and Europa League, as well as go for a run in the cup competitions," Southampton executive director of football Les Reed told the club's website. Pied, who joined Nice in August 2012, was loaned to their Ligue 1 rivals En Avant Guingamp for the 2014-15 season, but returned to Nice last term, making 35 appearances for the club. McCarthy, 26, made seven appearances at Palace following his move from Queens Park Rangers in July 2015. He had signed a three-year deal and would compete with Fraser Forster for the gloves, the club said. Southampton, who have already added Nathan Redmond from Norwich and midfielder Pierre-Emile Hojbjerg from Bayern Munich to the squad, begin their Premier League campaign at home to Watford on August 13.
#Premier League #Southampton #Europa league #Crystal Palace #Jeremy Pied #Alex McCarthy
You May Also like: