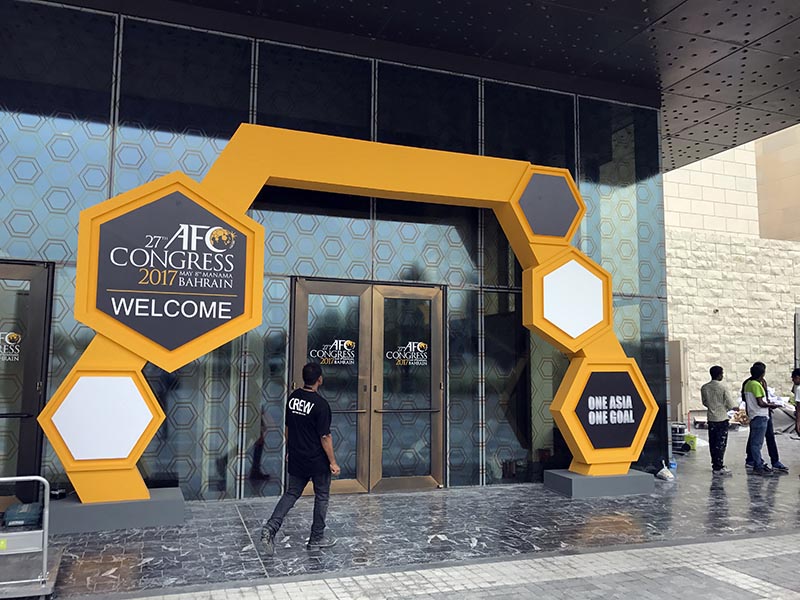 A member of staff walks towards the building hosting the AFC, Asian Football Confederation Congress 2017, in Manama, Bahrain, on Sunday, May 7, 2017. Photo: AP
MANAMA: The specter of fresh corruption scandals hangs over the annual gathering of world soccer leaders, two years after the FIFA Congress was shaken by the exposure of far-reaching fraud. The election of Asian members to FIFA's ruling council on Monday kickstarts a week of meetings in Bahrain, with powerbroker Sheikh Ahmad Al Fahad Al Sabah off the ballot after his alleged bribery was disclosed by American authorities. The Kuwaiti sheikh's resignation from all soccer roles — while remaining in his Olympic posts — leaves three men competing for three spots from the Asian Football Confederation on the FIFA Council, known as the executive committee until it was rebranded last year. The only contested AFC election is for the one protected FIFA seat for Asian women. Of the four contenders, one has previous FIFA experience: Moya Dodd, who was on the executive committee at the time colleagues were arrested in the May 2015 raids in Zurich. The Sheikh Ahmad allegations demonstrated that the US Department of Justice investigations into soccer corruption are ongoing even as FIFA officials swept up in 2015 prepare for sentencing hearings or trial in New York. "No one takes any pleasure in seeing either individuals or the game suffer," Dodd told The Associated Press on Sunday in the Bahraini capital Manama. "But I think that we have to accept that it's a work in progress to bring football to the level of integrity that we want it to be, and while we continue to have these controversies, our reputation will suffer. The view of football from the fans, the stakeholders, the sponsors etc. will also suffer." Sheikh Ahmad was identifiable in a transcript of a court hearing last month when FIFA audit committee member Richard Lai, an American citisen from Guam, pleaded guilty to wire fraud conspiracy charges related to taking around $1 million in bribes, including at least $850,000 from Kuwaiti officials. The cash was to buy influence and help recruit other Asian soccer officials prepared to take bribes, Lai said in court. Sheikh Ahmad denies any wrongdoing. "I think those of us who are in football have a responsibility to steer the game to take the next best step that we can for the game to move it in the right direction," Dodd said. "So that's what I'm focused on and the message I will give to the voting delegates this congress is that this is AFC's opportunity to demonstrate its values to the world." Challenging Dodd in the election are Mafuza Akhter of Bangladesh, Han Un Gyong of North Korea, who both declined to be interviewed, and Susan Shalabi of Palestine. The quartet is chasing one of six spots on the FIFA Council reserved for women, covering the six confederations. "I think we've seen how important it is for there to be a diversity of voices at the top table of FIFA," Dodd said. "When I joined, there had only been one (woman on the executive committee), there were then three and two of us couldn't vote, and I'd think when you look back you'd have to say that we did make a difference "Our voices were heard, it was part of a change in culture in FIFA and you saw in the reforms (that) women in football was a key tenet of the reforms and it's a key priority of FIFA going forward." The three men set to be confirmed Monday on the FIFA Council from Asia are Zhang Jian of China, Mariano Varaneta of Philippines and Chung Mong-gyu of South Korea. Ahead of the FIFA Congress, the governing body announced Qatar Airways as a sponsor through 2022 when Qatar hosts the World Cup. FIFA, which lost $369 million in 2016, has been struggling to fill sponsorship categories that have been vacant as corruption scandals have scared off potential commercial backers. FIFA didn't disclose the value of the Qatari sponsorship.
#FIFA Congress #Asian elections #FIFA council elections #FIFA bribery cases
You May Also like: