Spikers Gurung, Chaudhary feted with Player of the Year Awards 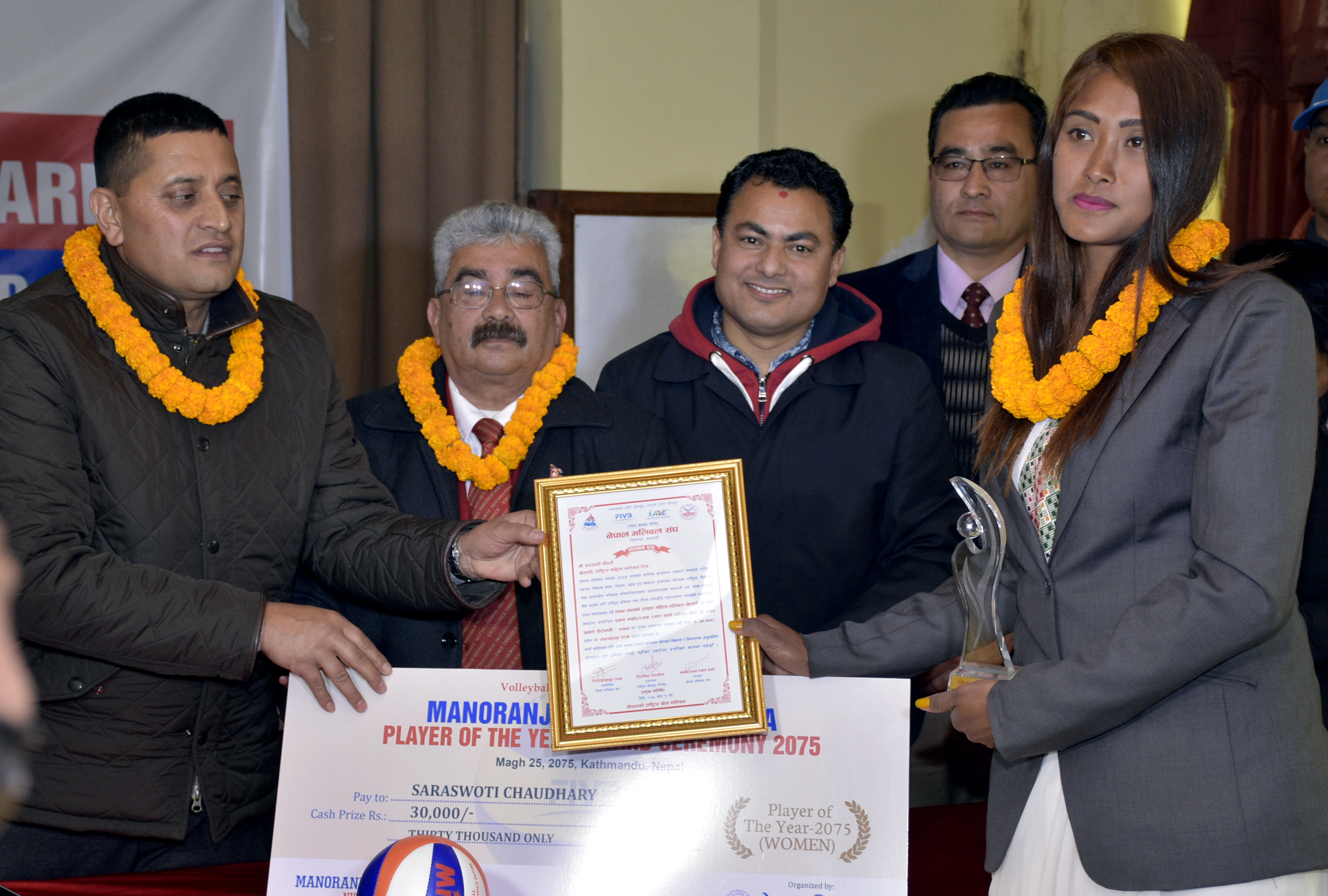 Nepal APF Club’s Saraswoti Chaudhary receiving the Manoranjan Raman Sharma Player of the Year Award in Kathmandu on Friday, February 8, 2019. Photo: THT
Kathmandu, February 8 Tribhuvan Army Club’s Dhan Bahadur Gurung and Nepal APF Club’s Saraswoti Chaudhary won the Player of the Year Awards here today. The spikers received Rs 30,000 each along with and felicitation letters. Nepal Volleyball Association President Manoranjan Raman Sharma established the award and he had deposited one million rupees in the trust after volleyball was declares as the national game. The NVA is responsible for choosing the winners and organising the programme annually. Vice-president of National Sports Council Pitambar Timsina, NVA President Sharma, Vice-president Ranjan Khadka and General Secretary Jitendra Bahadur Chand among others handed over the awards to the winners. While the women’s winner Chaudhary was present in the programme, player of the year in men’s section Gurung did not attend the ceremony as he is outside the valley to participate in a tournament. They were also declared the best players in the NVA Awards held last month. NSC Vice-president Timsina asked the NVA to move forward with concrete plans and programmes. “The government’s decision to announce volleyball as the national sport is also a challenge for the NVA. The association should make plans and programmes to develop the sport throughout the country and I assure every possible support from the NSC,” he added. “I established the award so that people remember me after my tenure in the association,” said NVA President Sharma. “We have started this in a small scale and the award could be bigger in future,” he added. NVA General Secretary Chand lauded his president’s initiation of establishing the award for the players. “We have been doing various activities for the sport and this one is a great initiation by our president,” he said. Chand also requested the government to support the NVA to organise the Asian Men’s Central Zone Volleyball Championship and finish the renovation of the NSC covered hall before the tournament. The Asian Volleyball Confederation has scheduled the tournament for May 4-12.
#Tribhuvan Army Club #Nepal APF Club #volleyball #Player of the year awards
You May Also like: