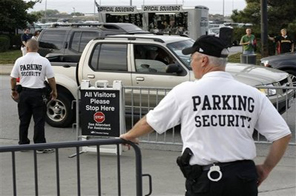 Security officers outside U.S. Cellular Field stand their posts before a baseball game between the Minnesota Twins and Chicago White Sox, Tuesday, Sept. 22, 2009, in Chicago. Sports officials responded in a low-key manner to security warnings that terrorists may target stadiums, saying that they have already boosted precautions so much, that the latest alerts won't make much difference. Source: AFP

NEW YORK: Sports officials are confident that adequate security measures are in place to thwart any potential terrorist attacks on stadiums around the country.

Responding in a low-key manner to security warnings that terrorists would like to attack stadiums, several sports officials said Tuesday that they have already boosted precautions so much the latest alerts won't make much difference.

Federal bulletins sent to police departments this week and obtained by The Associated Press said officials knew of no specific plots against stadiums and other entertainment venues, but cautioned officers and private companies to be vigilant.

"We are aware of the memos from the federal government, including that there is no information specific to any sports stadium," NFL spokesman Greg Aiello said. "This underscores the high levels of stadium security that are maintained and will continue to be maintained at every NFL game for the safety of our fans and teams."

Similar alerts often are issued a recent one focused on the vulnerabilities of mass transit systems but they've received increased attention in the last week against the backdrop of ongoing terror investigations in New York City and Denver.

"Major League Baseball utilizes heightened security procedures at all ballparks as a matter of practice and will continue to do so," the commissioner's office said in a statement. "Fan security always has been and always will be our most important priority."

NHL spokesman Frank Brown said security is a collaborative effort for the league.

"We work closely with our arenas and local law enforcement agencies to create a safe, secure environment for our fans at all times," he said. "We work with our partners continually to update and apply appropriate security measures to address security concerns."

For the NBA, like most leagues, security plans evolve.

"After Sept. 11, the NBA has significantly increased security inside and outside our arenas and we, our teams and our arenas regularly review and update as necessary," spokesman Brian McIntyre said.

The bulletin on stadiums said an al-Qaida training manual specifically lists "blasting and destroying the places of amusement, immorality, and sin ... and attacking vital economic centers" as desired targets of the global terror network.

A joint statement from Department of Homeland Security and FBI said while the agencies "have no information regarding the timing, location or target of any planned attack, we believe it is prudent to raise the security awareness of our local law enforcement partners regarding the targets and tactics of previous terrorist activity."

Warnings were issued 10 days before the International Olympic Committee picks a 2016 host city. Chicago is a finalist along with Tokyo, Madrid and Rio de Janeiro.

Andy Gill, a 37-year-old salesman from Chattanooga, Tenn., who has tickets to Saturday's Ohio-Tennessee game, thought Knoxville's Neyland Stadium would make an attractive target to terrorists because of its size (it holds more than 102,000 fans).

"I'm not going to change my plans, but it is disturbing," he said. Still, "I think there's a lot better chance of something happening to me on my way to my next (work) appointment."

At a Colorado Rockies game, 33-year-old Nichole Duncan of Thorton, Colo., said she'd still bring her family to the ballpark.

"I don't think people can live their lives in fear like that," she said. "I think we still have to go on living and enjoying life."

At an Indians game in Cleveland, Jess Pryor said she believes most fans don't worry about their safety at games. "It will be that way until something else happens again," she said.

While the Detroit Tigers took pregame batting practice, Larry and Meg Stevanus of Elyria, Ohio, sat on a wall outside the ballpark waiting to see their 10th game this season.

"I just traveled to Washington, D.C., and knew the alert had been raised, but I don't put a lot of emphasis on it," he said. "I used to think about it before games, once in a while. We've been coming here since 1994 and have always felt safe here."

However, James A. McGee, an instructor at the University of Southern Mississippi's National Center for Spectator Sports Safety and Security, warned sports venues could be a "very, very, very likely target" for terrorists at some point.

"As more time separates us from 9-11-2001, there is a tendency to become more lackadaisical," said McGee, a former FBI special agent. "If you couple that with the economic situation right now, many times and it's always been the case decisions are made to save money and many times the way they save that money is they may lessen security."

#Sports officials respond calmly to terror warnings
You May Also like: