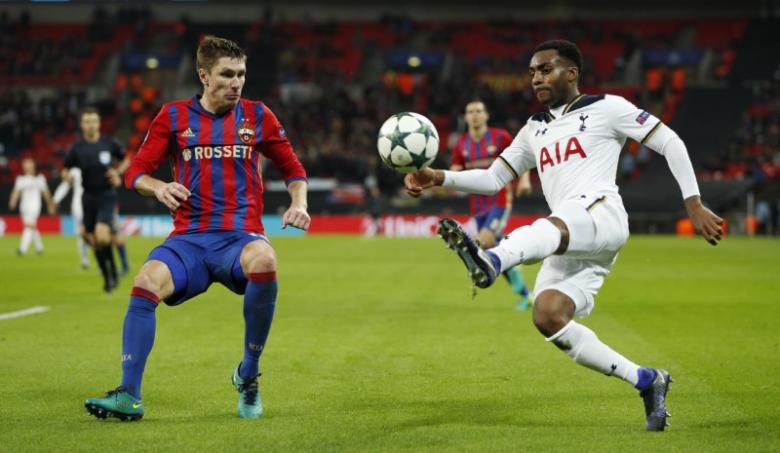 Tottenham's Danny Rose in action with CSKA Moscow's Kirill Nababkin Action Images via Reuters
LONDON: Tottenham Hotspur dressed the wound of their Champions League exit with a 3-1 victory over CSKA Moscow on Wednesday that secured the consolation prize of a place in the continent's second-tier contest. A well-taken effort from Dele Alli, a Harry Kane tap-in and an Igor Akinfeev own goal helped Spurs overcome Alan Dzagoev's opener for CSKA and wrapped up their first win at their adopted Wembley home. That was enough for Spurs, whose hopes of reaching the knockout rounds had already ended, to finish third in Group E on seven points, four ahead of CSKA, who could have pipped them to the Europa League qualifying spot. Things had looked bleak for Spurs when they fell behind after 33 minutes as Dzagoev latched onto a Zoran Tosic header and thumped his effort past Hugo Lloris. The hosts, however, were by far the better side in the first half and were quickly level as Christian Eriksen's cross found its way through to Alli, who controlled the ball perfectly before shaping a beautiful finish past Akinfeev. They went ahead on the stroke of halftime as Kane tapped in Danny Rose's cross for his ninth goal in his last nine games in all competitions and rounded off the scoring with 13 minutes remaining when Akinfeev saved Alli's header, only to kick the ball into his own net.
#Champions League #moscow #Tottenham Hotspur #Alan Dzagoev
You May Also like: