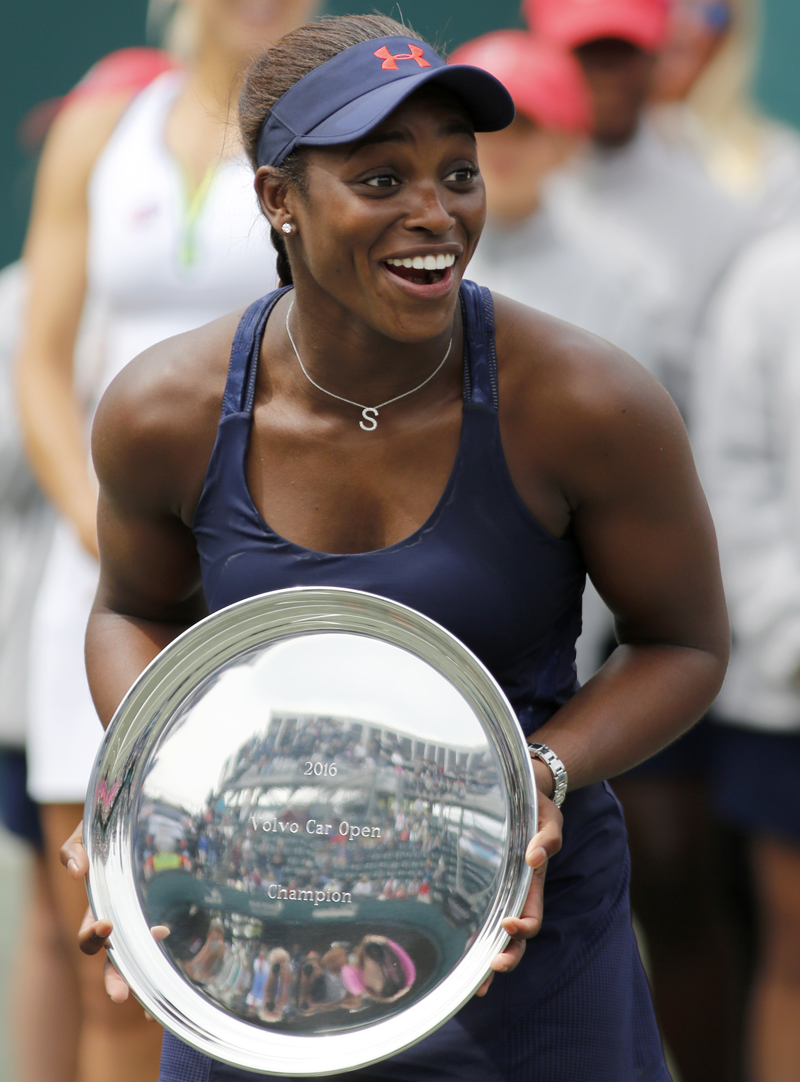 Sloane Stephens shows her excitement while learning that she won a brand new Volvo V60 Polestar after defeating Elena Vesnina, of Russia, during their finals tennis match at the Volvo Car Open in Charleston, S.C., Sunday, April 10, 2016. Photo: AP
Los Angeles, April 11 American Sloane Stephens won her third WTA title of 2016 on Sunday, beating resurgent Russian Elena Vesnina 7-6 (7/4), 6-2 in Charleston, South Carolina. The seventh-seeded Stephens rallied from an early break to take a 5-2 lead in the first set, only for Vesnina to win four games in a row and give herself a set point with a welter of winners. Stephens kept her cool, won the set in a tiebreaker and powered through the second. She broke Vesnina twice more and clinched the victory on her fourth match point. “I just said to myself, ‘You have to fight for every point and compete,’” said Stephens, who had saved a match point against Russian Daria Kasatkina in the quarter-finals and reached the final after top seed and defending champion Angelique Kerber, the reigning Australian Open champion, withdrew with illness while trailing in their semi-final contest. “She’s a great player, so I knew I had to stay in every point,” she said of Vesnina. Stephens, who lifted the trophies in Auckland and Acapulco this year, is hoping Sunday’s triumph will be a stepping stone to a strong season on the red clay of Europe. “I love red clay, so starting in Madrid, I think I’ll have a lot of fun and just look forward to the French Open,” she said.
#Australian Open #South Carolina #Angelique Kerber #Sloane Stephens #Elena Vesnina
You May Also like: