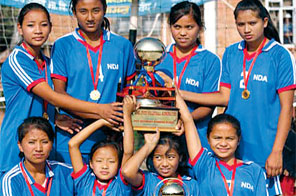 KATHMANDU: Skipper Nupur Pandey scored 35 and took three wickets to steer Suryodaya to the final of the U-16 Inter-school Kathmandu District Selection Tournament with a comprehensive 69-run win over Ananda Bhumi School here at the Tribhuvan University Stadium today.

Both the teams needed victory to make it to the final from Group ‘A’ and Suryodaya came up strong when it mattered the most. Batting first, Suryodaya scored a massive 138-8 in 20 overs and dismissed Ananda Bhumi for 69 in 18.5 overs. Three top-order batsmen — Sanjeet Shrestha, Sachin Timalsina and skipper Nupur — laid the foundation for the huge total.

Opener Sanjeet and Sachin gave Suryodaya a solid start with a stand of 53 in six overs before Ayush KC trapped the former batsmen leg before wicket for 26. Sanjeet struck three fours in his 22-ball knock. Sachin was run out in the 17th over after scoring a fluent 45 off 43 balls. He hit five boundaries in his 43-ball innings. Sachin also put on 63 runs for the second wicket with Nupur, who made run-a-ball 35. Nupur’s dismissal in the 18th over saw their team lose five more wickets in the last 16 balls. Bibek Kandel, Prakash Poudel and Ayush KC claimed two wickets each for Ananda Bhumi.

Ananda Bhumi were never in contention chasing 139 runs after losing opener Prakash Poudel in the first ball of their innings. Only Poudel’s opening partner Ayush put some resistance with a patient 28-ball 18. None of the other Ananda Bhumi batsmen were able to score in double figures. Sushan Shrestha was the pick of the Suryodaya bowlers with 4-11 while man of the match Nupur claimed 3-13. Rishab Rajbhandari also grabbed two and Nikesh Shrestha one wicket. Suryodaya will play for the championship with New Lira School, who have already been qualified from Group ‘B’, on Sunday.