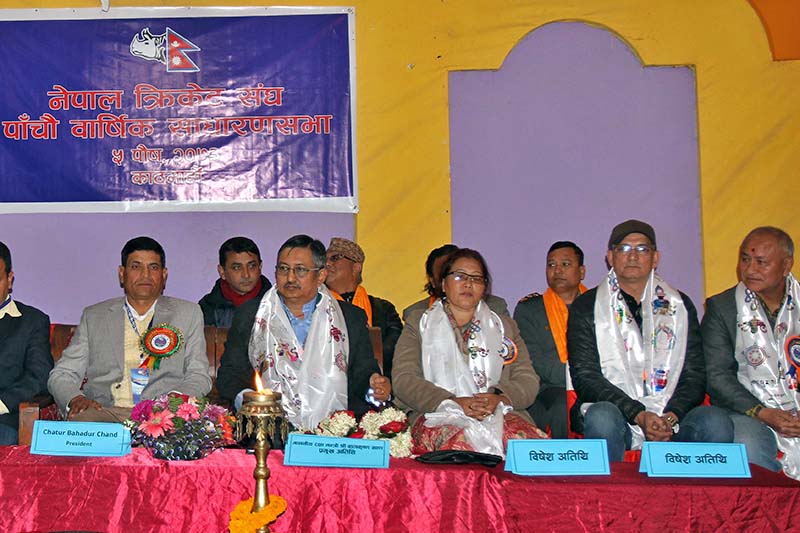 Defense Minister Bal Krishna Khand (second from left), CAN President Chatur Bahadur Chand (left) and other officials attending the fifth Annual General Meeting of the Cricket Association of Nepal in Kathmandu on Tuesday, December 20, 2016. Photo: THT
Kathmandu, December 20 The fifth Annual General Meeting of the Cricket Association of Nepal, whose membership has been suspended by the International Cricket Council, today decided to appeal the National Sports Council and the world cricket governing body to amend their decisions and cooperate with the elected body. A total of 83 representatives from nine regions and 36 district associations attended the AGM that also decided to sack Chief Operating Officer Chhumbi Lama and organise a national-level cricket tournament in memory of its senior vice-president TB Shah. “The AGM decided to appeal the NSC and ICC to amend their previous decisions and cooperate with us to pave way for the development of the sport,” said General Secretary Ashok Nath Pyakurel, who presented the annual report of the association in the closed session. “The AGM has given us the consent to work towards getting the approval of the elected body from concerned authorities,” he added. Pyakurel said the AGM also decided to expel COO Lama. “We reached the conclusion that his working ways were not satisfactory,” he said. “And we also decided to organise a national-level tournament in memory of our former senior vice-president TB Shah,” Pyakurel added. Earlier, Defense Minister Bal Krishna Khand inaugurated the AGM. Khand said he was not much aware of the controversies in cricket but he was with the elected committee. “I know that you have been facing a lot of problems. Definitely the situation is not easy and you need to be more aggressive if needed,” he said. “It is a wrong practice that NSC has been run by a single person. Do your fight, we are behind you. And if you succeed, that will be the nation’s success,” Khand added. CAN President Chatur Bahadur Chand challenged the NSC of taking action if his committee was illegal. “We are ready to step down if the NSC proves that this committee was formed illegally,” he said. He also accused the ICC of playing double standard. “At one hand, the ICC suspended the membership of CAN for government interference and later on they formed the Advisory Committee in coordination with the same institution,” he said. Chand said the ICC and their agents were abusing the funds of Nepal. “No one knows how the ICC is spending the money meant for Nepal,” he said. He also raised the question over not using the CAN logo by the players in international matches. “We don’t know who is doing this but we think General Secretary Pyakurel said the ICC Advisory Committee was the solution of the problem. “No other body has the right to write down the constitution of the CAN. Even if anybody does, that needs to be approved by the AGM and we have got the majority,” said Pyakurel. “We do not have to follow the ICC in each and every matter. They are welcome if they come with true intention.” Treasurer of NSC Surendra Hamal said the sports governing body is ruled by one individual and others are just mute spectators. “There is fault in NSC policy and that needs to be amended first to stop any individual from taking rampant decisions,” he said. “I remember the NSC not giving approval for the elections of CAN on three occasions. I was there but could do nothing,” Hamal added. Nepal National and International Players Association President Deepak Bista, Former Vice-president of All Nepal Football Association Karma Tshiring Sherpa, Nepali Congress leader Bir Bahadur Balayar, Joint General Secretary of Nepal Olympic Committee Rajiv Shrestha and Member of Parliament Mohan Rai among others were also present on the occasion.
#International Cricket Council #National Sports Council #All Nepal Football Association #Cricket Association of Nepal #Defense Minister Bal Krishna Khand
You May Also like: