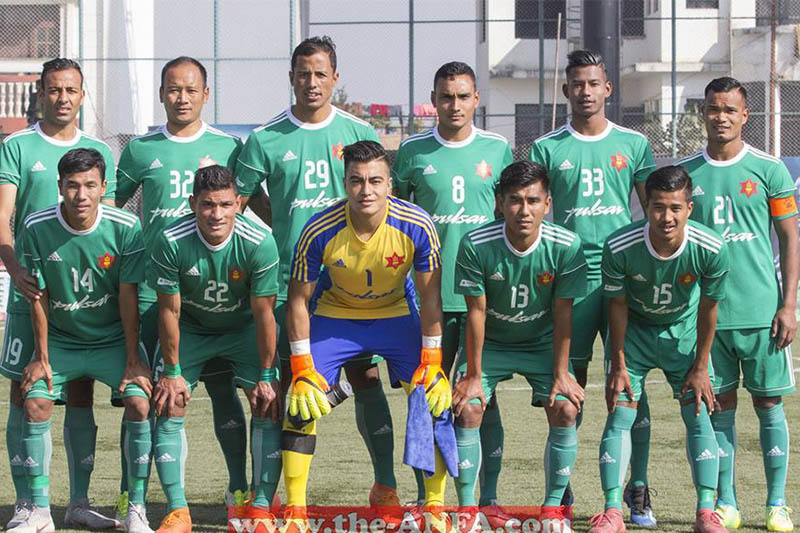 FILE: Tribhuvan Army Club players pose for a portrait prior to their league game. Courtesy: ANFA/Facebook
POKHARA: Tribhuvan Army Club (TAC) ended visiting Cameroon's Dauphins FC chances of lifting fourth knock-out titles on a trot with a narrow 1-0 victory here at the Pokhara Stadium on Thursday. With this victory, TAC has set an enticing title showdown against Three Star Club at the same stadium on Saturday. TAC's Tej Bahadur Budathoki directed Deepak Gurung's cross towards goal and beyond Dauphin's goalkeeper Preso's full-length dive into the top corner in the 13th minute. Budathoki's solitary strike proved to be enough to see off Dauphins FC in an intense encounter today. Both the teams created ample goal-scoring opportunities in the second half but to no avail. TAC's Bharat Khawas failed to score on a one-versus-one situation in the 71st minute. Likewise, TAC's goalkeeper Bikesh Kutu also made some spectacular saves to thwart Dauphins strikes to keep the departmental team in the game. In the dying stage of the second-half, Dauphins FC were reduced to 10-men after their striker Yanik Ohana was sent off with two bookable offences. Before taking on TAC, Dauphins FC had arrived in the lake city after lifting Budasubba Gold Cup (Dharan), Manakamana Cablecar Pokhara Cup (Pokhara) and Tilottama Gold Cup (Butwal) in a row. The tournament is organised by Sahara Club and sponsored by Himshree Food Pvt Ltd.
#Tribhuvan Army Club #Three Star Club #Dauphins FC
You May Also like: