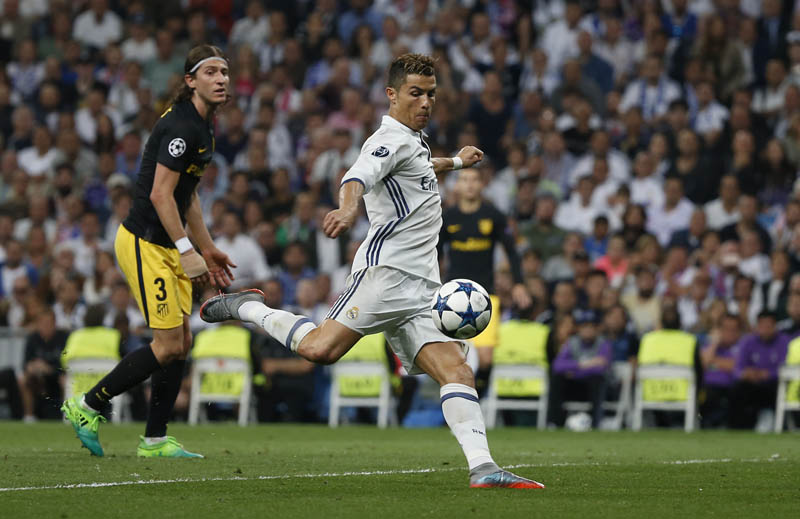 Real Madrid's Cristiano Ronaldo scores their second goal. Photo: Reuters
MADRID: Cristiano Ronaldo hogged the headlines after his hat-trick against Atletico Madrid put Real Madrid on the verge of the Champions League final, although captain Sergio Ramos believes an effervescent squad was a crucial factor behind their success. Real shook off the absence of record signing Gareth Bale and an injury to Dani Carvajal in the first half to crush Diego Simeone's usually resilient side, scoring as many goals on Tuesday as Atleti had conceded in their previous seven games. READ ALSO: Real's least experienced defender Nacho Fernandez was called on to deputise for Carvajal in the unfamiliar right-back role while the display of Isco was viewed by many in the Spanish media as an upgrade on Bale, and 21-year-old Marco Asensio caused Atleti numerous problems down the left when he came on. "The squad is the key to our success, having substitutes that always make their presence felt and play as well as those of us who play more often," Ramos told reporters. "This is the path we need to follow, where everyone is committed and ready to do their part. It's difficult at Madrid to keep everyone happy because everyone is so good but those demands and the level of competition makes everyone eager to play and make the difference." Barring a remarkable turnaround in next Wednesday's semi-final second leg at the Vicente Calderon, Real will reach a third Champions League final in four years, while they are on course to win a first domestic league title since 2012. "It was one of those games where everything went well, it was an impeccable performance," said Ramos. "We kept a clean sheet and as well as Cristiano's goals, which will grab the front pages, you have to highlight the mentality of the group, our efforts, our willingness to press Atletico high in their own half." Atletico also had injury problems going into the game and were missing both of their right backs in Juanfran and Sime Vrsaljko as well as Jose Gimenez. Yet Simeone's side looked flustered, while there was a remarkable freshness to Madrid, which Ramos said was down to Zinedine Zidane's rotation policy. The Frenchman, who is on track to become the first coach to successfully defend the European Cup since AC Milan's Arrigo Sacchi in 1990, has carefully managed his squad throughout the season. No-one has been exempt from sitting out the occasional game, even Ronaldo, who has started 26 of 34 league fixtures, and resting the prolific Portuguese paid dividends as he added to his treble against Bayern Munich in the quarter-final second leg with another hat-trick. "Zidane has been very intelligent in managing the minutes everyone plays," added Ramos. "The players who normally play the most are arriving at the most important moments of the season feeling fresher and more focused."
#Champions League #Cristiano Ronaldo #Spain #Real Madrid #Sergio Ramos #Toni Kroos #Spanish La Liga
You May Also like: