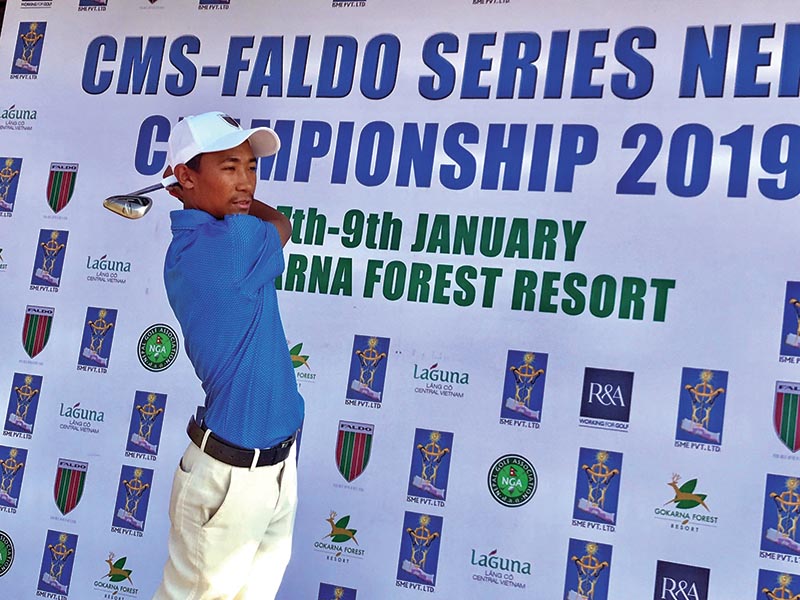 Subash Tamang plays a shot during the first round of the CMS Faldo Series Nepal Championship on Monday. Photo Courtesy: Gokarna Gulf Club
Kathmandu, January 7 Subash Tamang began the CMS Faldo Series Nepal Championship with an impressive round of one-under 71 here at the Gokarna Golf Club today. Tamang, competing in the boys’ 12-16 age category, was five strokes ahead of Binod Tamang, who shot four-over 76. Sam Doublard and Ritesh Tamang were further behind with the score of seven-over 79. In the boys’ 17-21 age section, Sukra Bahadur Rai took a six-stroke lead over Bipin Tamang. Rai, the winner of the Surya Nepal Eastern Open at his home town of Dharan last month, shot two-over 74. Tamang played a round of eight-over 80 to be at the second position, while Suman Nepal was third at nine-over 81. In girls’ section, Prativa Rai shot 13-over 85 which was good enough to take a four-stroke lead. Kashmira Shah was second at 17-over 89, while Juny Gurung shot 23-over 95 to be at the third position. The 16-year-old Subash Tamang was at his best in the opening round of the tournament. He took the turn at even-par 36 and carded one-under 35 on the back nine. Tamang, who underwent one-week training in Bangkok last month and also participated in a tournament, dropped a shot on the second hole before carding a birdie on the sixth. On the back nine, Tamang carded two straight birdies on the 15th and 16th holes after facing a bogey on the 12th hole. Likewise, leader in the senior boys category, Rai played three-over 39 on the front nine and carded one-under 35 on the back nine. Rai carded a lone birdie on the third hole but he faced bogeys on the first and seventh holes apart from a double bogey on the eighth hole. On the back nine, Rai carded birdies on the 10th and 14th holes before dropping a shot on the 17th hole. A total of 26 golfers are taking part in the 54-hole tournament organised jointly by Nepal Golf Association and Gokarna Forest Resort under the sponsorship of ISME Pvt Ltd. The winners of all three categories will earn berths in 13th Faldo Series Asia Grand Final to be held at the Laguna Lang Co in Danang, Vietnam, in March.
#Gokarna Golf Club #CMS Faldo Series Nepal Championship #Subas Tamang
You May Also like: