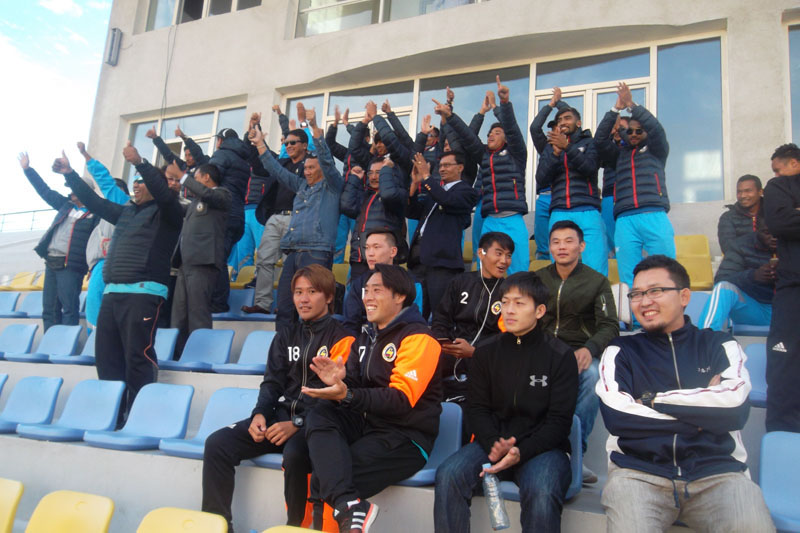 Three Star Club team members celebrate after Mongolia’s Erchim FC defeated Cambodia’s
Nagaworld FC in the 2017 AFC Cup Qualifying Play-off match at the MFF Football Centre in Ulaanbaatar on Thursday, August 25, 2016. Erchim won the match 1-0. Photo: NSJF
Kathmandu, August 25 Nepal’s Three Star Club have qualified for the 2017 AFC Cup Play-off round as they topped the Group B in the qualifiers in Mongolia today. Three Star, who were not in action today, finished as group winners with four points after hosts Erchim FC defeated Cambodia’s Nagaworld FC 1-0 at the Football Centre MFF, Ulaanbaatar. Davaajav Battur scored the match winning goal for Erchim in the injury time of the second half. With the result, Erchim finished as group runners-up with three points behind Three Star, while Cambodia’s Nagaworld were at bottom of the group with one point. Three Star defeated Erchim 2-0 in their opening match on Sunday and played a 1-1 draw against Nagaworld on Tuesday. Three Star waited for the result of the match between Erchim and Nagaworld to know their fate for the next phase of the qualification. Nagaworld needed to beat the hosts with more than two-goal margin to finish first ahead of Three Star on better goal difference. “We had to defeat Erchim by huge goal margin to get into the next phase. The players did not meet the expectations and failed to play confidently,” said Nagaworld head coach Meas Channa. Nevertheless, the result brought happiness among the team members of Three Star team. “I am delighted with the achievement and all credits for the success go to the players who put in their full efforts,” said Three Star head coach Meghraj KC. Similarly, skipper Bikram Lama also expressed his happiness and said the success was the result of team effort of players, coaches, managers and supporters. Meanwhile, FC Dordoi Bishkek of Kyrgyzstan from Group A and Tatung FC of Bhutan from Group C qualified for the play-off rounds. The play-off will be played in January next year where a total of eight teams will compete for the group stage round. Other teams and venue are yet to be decided.
#Three Star Club #Mongolia #Nagaworld FC #2017 AFC Cup Play-off round
You May Also like: