Tiger and The Bear thrill crowd 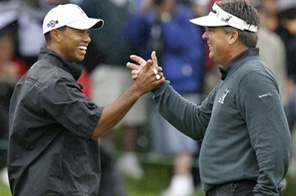 Tiger Woods, left, shakes hands with Kenny Perry after Woods chipped in from the rough on the par-4 18th hole during the Memorial Skins golf game, Wednesday, June 3, 2009, in Dublin, Ohio. Source: AP

Then Woods cleanly swept the ball out of the gnarly rough and it tumbled down the slope, curling into the hole to the roars of a large crowd.

Woods tried to stare down Perry before his face cracked open in a wide grin, then they slapped high fives.

It was only a charity skins game the day before the start of the tournament at Muirfield Village, but it was a memorable conclusion to a memorable day. Not only did Tiger look like the Tiger who dominated golf before his knee surgery last summer, but he was paired with Jack Nicklaus, two of the game's greatest players walking together on a cold and rainy day in suburban Columbus.

"I haven't been able to hit balls as far as I normally do, but that's coming," he said. "Each week I'm able to hit a little bit longer. It's great. Just a little longer before I'm able to get all of that back."

Nicklaus, one legend watching another, said Woods was attacking the course like he did before his operation.

"I thought his swing was a lot more aggressive today than I've seen it in previous tournaments on television," said Nicklaus, the Memorial's founder, course designer and host. "I thought he has been babying his leg a little bit. That's rightly so. That's what you would expect. I didn't see much babying today; I thought he went at it pretty good."

Woods enjoyed his time with Nicklaus, the player whom he has measured his own magnificent career against. Now 69, Nicklaus is 23 years removed from his 18th and last major championship. That total has become Woods' holy grail.

"You could see it on certain holes, certain shots, him kind of revert back to the old Jack," Woods said. "It was neat to see."

Woods leads an elite 120-player field into the tournament that Nicklaus created in 1976 and has nurtured through his top competitive years and now in his dotage. Major champions dot the starting grid: Padraig Harrington, Zach Johnson, Ernie Els, Mike Weir, David Love III, Vijay Singh, Jim Furyk and Geoff Ogilvy among others.

But Woods is still the focal point, particularly with the U.S. Open at Bethpage Black looming just two weeks away.

Woods is coming off a three-week break from the tour. No one would know it if he were "struggling" with his injury comeback. After getting knocked out in the second round at the Accenture Match Play, he's been in the top 10 in his last five starts, including a win at the Arnold Palmer Invitational. In his last start, at The Players Championship, he was eighth.

He spent the time off with his family — and also spent a lot of time hitting balls and honing his game for the first time in almost a year.

"That's been one of the great things of being healthy enough," he said. "I'm able to get back out there and work on my game."

For the record, Nicklaus hit a 6-foot birdie putt on the second hole to win two skins. Woods' chip-in on the final hole gave him the final skins, with all the money from the eight players donated to The First Tee.

"A lot of people were out there today," said Nicklaus, assessing the gallery. "On a day like today? I promise you I wouldn't have been out there — not even to watch Nicklaus and Tiger!"

But the crowd obviously thought it was worth the opportunity to see the two icons together.

Stewart Cink, a late sub in the same foursome with Nicklaus, Woods and Perry, drew an obvious parallel.

"Whether it's on Wednesday for a charity fun day or on Sunday of a major championship, they both just lock in," Cink said, shaking his head.

#Tiger and The Bear thrill crowd
You May Also like: