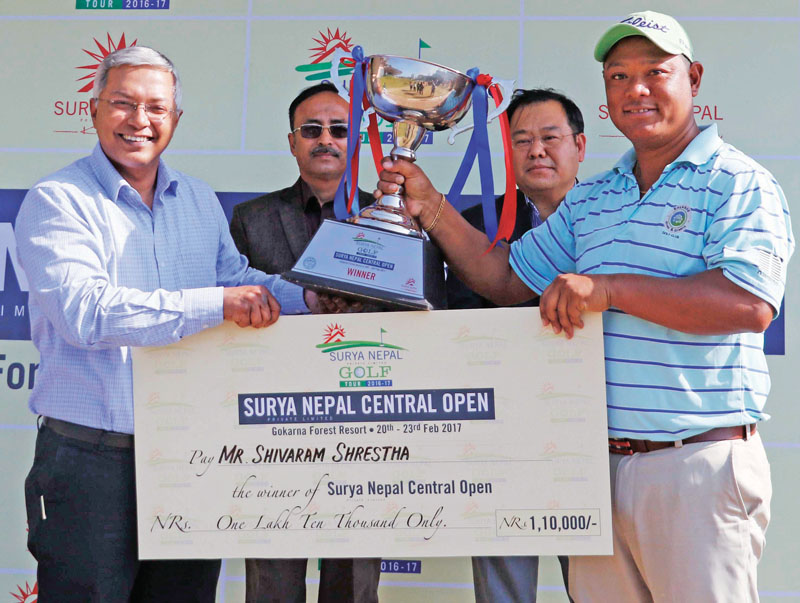 Vice-president, Sales and Marketing, Surya Nepal Pvt Ltd Dipra Lahiri handing over the trophy to Shivaram Shrestha as Nepal PGA President Rabindra Man Shrestha and Surya Nepal Marketing Manager Bal Kishan Gurung look on after the Surya Nepal Central Open at the Gokarna Golf Club in Kathmandu on Thursday, February 23, 2017. Photo Courtesy: Nepal PGA
Kathmandu, February 23 Amateur golfer Tenzing Tsering faltered in the final round of the Surya Nepal Central Open as Nepal No 1 pro Shivaram Shrestha claimed fourth straight title here at the Gokarna Golf Club today. Shrestha, who was nine strokes off the pace going into the final round, carded a three-under 69 for the total score of four-under 284, while the 16-year-old amateur golfer Tsering failed to hold his nerve and dropped five shots in two holes before shooting seven-over 79 to post a three-under 285 in the fourth event under the Surya Nepal Golf Tour 2016-17. Shrestha said he was able to win the trophy only after Tsering faltered in the final round. “I did not play well in the tournament and had not hoped of winning the title as I was nine strokes behind him,” said Shrestha, who also won the first three events of the season. “The approach shot on the 17th hole was the turning point of the match,” added Shrestha, who landed within five feet of the flag from 200 yards after hitting a wayward tee on the par-4 hole. With the seventh Central Open crown, Shrestha captured 34th career title and received Rs 110,000. Only twice he has failed to win the Central Open — in 2009-10 season when he could not claim a single trophy and in previous season when he took just two titles. Asked whether he was eyeing a clean sweep, Shrestha said: “Why not? I am in good shape and will go for it.” The Surya Nepal Golf Tour 2016-17 features eight events. Teenager Tsering accepted he succumbed to the final-round pressure playing alongside top pro Shrestha and former No 1 pro Rabi Khadka. “I could not play as expected today and he (Shrestha) performed well,” said the ever-smiling Tsering, who featured in the leaders’ group for the first time in the Tour. “I had a chance to win the trophy but I missed it. It was a nice experience and I am happy with my overall performance,” said Tsering, who played six-under 66 on the opening day before carding two-under 70 each in the second and third rounds. Shrestha cut the deficit to just two strokes after carding a four-under 32 on the front nine after Tsering played three-over 39. He then fell five shots behind after facing two straight birdies from the 10th and Tsering carded a birdie on the 12th hole. Tsering then suffered a double bogey five on the 13th and a triple bogey eight on the 15th that allowed Shrestha level the scores at three-under. After both the players saved pars on the 16th, Shrestha hit a wayward tee towards right off the fairway before Tsering had a perfect drive. Shrestha then hit a perfect approach shot, his seven-iron strike giving him the edge as the ball landed within five feet of the cup and he carded a birdie. He took a lead for the first time in the four-day tournament after Tsering two-putted from 15 yards for a par. Tsering came close to forcing a playoff but the amateur player saw his ball missing the cup by inches after Shrestha missed a birdie putt from 15 yards on the final hole. Nevertheless, Tsering lifted the amateur section trophy, his maiden title of the Tour, with an emphatic 13-stroke victory over fellow national team member Tanka Bahadur Karki, who shot a 79 for a total score of 10-over 298. Prithivi Malla (77) was a distant third 310. Defending champion Sanjay Lama (72) of Army Club was second among the pros with the total score of one-under 287 and received Rs 70,000. RNGC pro Rabi Khadka (75) and home club pro Bhuwan Nagarkoti (72) shared the third place at one-over 289. They earned Rs 45,000 each. Jayaram Shrestha (72) was fifth at 293 and got Rs 35,000. Army Club pro Dhana Thapa (76) was sixth at 296, while Deepak Magar (72) and Deepak Acharya (71) shared the seventh position at 10-over 298. Bal Bhadra Rai (77) of Dharan finished ninth at 299, while Rame Magar (76) was 10th at 304. A total of 48 players — 33 pros and 15 amateur golfers — took part in the event that carried a cash purse of Rs 600,000. Vice-President, Sales and Marketing, at Surya Nepal Pvt Ltd Dipra Lahiri, Marketing Manager Bal Kishan Gurung, Nepal PGA President Rabindra Man Shrestha and Advisor Ghana Shyam Thapa gave away the prizes to the winners.
#Gokarna Golf Club #Surya Nepal Central Open #Shivaram Shrestha #Tenzing Tsering #Nepal No 1 pro
You May Also like: