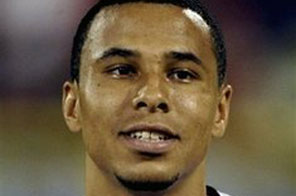 FILE - In this Sept. 9, 2009, file photo, United States soccer player Charlie Davies sings his national anthem prior to a 2010 World Cup qualifying soccer match against Trinidad and Tobago in Port of Spain, Trinidad and Tobago. Davies was injured in a single-car accident in the Washington, D.C., area in which one person died early Tuesday, Oct. 13, 2009 . U.S. Soccer Federation Neil Buethe says Davies was in stable condition and that his injuries are not life-threatening, but required more than 5 hours of surgery Source: AFP

ARLINGTON: U.S. national team forward Charlie Davies is recovering after suffering several broken bones and a lacerated bladder in a one-vehicle accident in which another person was killed.
Davies underwent several hours of surgery Tuesday at Washington Hospital Center Medstar, where he is listed in serious but stable condition.
Davis broke two bones in his right leg and also sustained facial fractures and a fracture in his left elbow. A U.S. Soccer team doctor says such injuries "usually require a recovery period of six to 12 months," making it unlikely Davis will be able to play in next summer's World Cup.
The accident took place at about 3:15 a.m. in the suburbs of the nation's capital.

#US player Davies: several broken bones in accident
You May Also like: