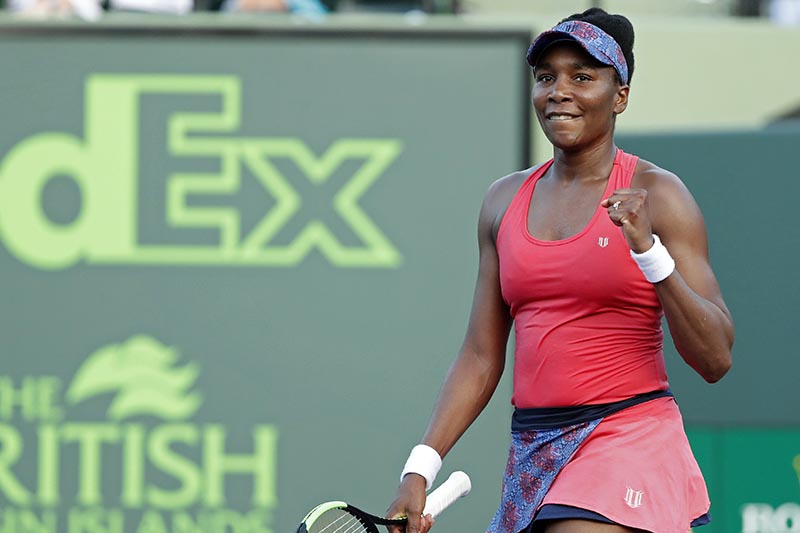 Venus Williams of the United States celebrates after match point against Johanna Konta of Great Britain (not pictured) on day seven of the Miami Open at Tennis Center at Crandon Park, in Key Biscayne, Florida, USA, on March 26, 2018. Photo: Geoff Burke-USA TODAY Sports via Reuters
Venus Williams upended defending champion Johanna Konta 5-7 6-1 6-2 on Monday to reach the Miami Open quarter-finals while a dominant Victoria Azarenka also advanced with a straightforward win over Agnieszka Radwanska. Three-times champion Williams stormed back from an early deficit to cruise past the British 11th seed, who needed several bouts of treatment on her lower back throughout a match that lasted two hours and 19 minutes. Perhaps more impressive was that Williams, who turns 38 in June, was able to look so in control despite playing a day after spending nearly three hours on the court for her third round clash against Dutchwoman Kiki Bertens. Former world number one Azarenka, in only her second event after an eight-month absence because of a custody dispute involving her son, also looked sharp throughout her 6-2 6-2 win over 30th-seeded Pole Radwanska. The Belarussian, competing as a wild card, won 79 percent of her first service points and needed only 82 minutes to prevail in a clash between former Miami champions. Up next for the 28-year-old is Czech fifth seed Karolina Pliskova, who advanced to the last eight after Zarina Diyas of Kazakhstan was forced to retire injured while trailing 6-2 2-1. Former world number one Pliskova was efficient from the start and did not drop a point on her first serves in the entire match against Diyas, who took multiple medical time-outs and was visibly struggling with her movement. Sloane Stephens raised her game to levels similar to last year when she won the U.S. Open as she beat Spanish third seed Garbine Muguruza 6-3 6-4 and secure passage to the quarter-finals. The American 13th seed dictated play against the Wimbledon champion from the start by taking eight of the first nine points of the match. After securing a break in the fifth game of the second set, Stephens sent Muguruza packing with a backhand on the line on her second match point. Stephens, who equalled her best result in Miami having also reached the quarter-finals in 2015, will next face German 10th seed Angelique Kerber, a 6-7(1) 7-6(5) 6-3 winner over Chinese qualifier Wang Yafan. Ukrainian fourth seed Elina Svitolina also advanced with a 7-5 6-4 win over Australian Ashleigh Barty. French Open champion Jelena Ostapenko will cap the night session with her clash against ninth-seeded Czech Petra Kvitova.
#quarter-finals #Johanna Konta #Venus Williams #Miami Open #Key Biscayne #Tennis tournament
You May Also like: