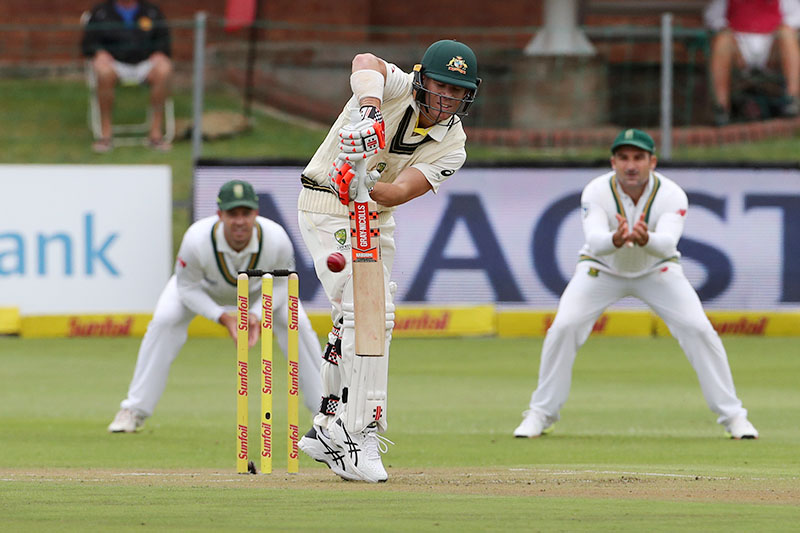 Australia’s David Warner in action. Photo: Reuters
PORT ELIZABETH: Opener David Warner proved the aggressor with a quick-fire unbeaten half-century as Australia saw off a testing opening hour before reaching 98 for one at lunch on the first day of the second test against South Africa on Friday. The tourists looked as though they would make it through the opening session unscathed, but on the stroke of lunch lost Cameron Bancroft (38), caught by wicketkeeper Quinton de Kock off seamer Vernon Philander. Warner, who hogged the headlines in the build-up to the game following an ugly confrontation with De Kock in the first test, was sublime as he overcame a slow start to reach a superb unbeaten 50 from 69 balls at the interval. He will resume after the break with Usman Khawaja, who has battled for form in recent tests. Having bravely elected to bat in overcast conditions on a pitch with a healthy grass cover at St George’s Park, the tourists managed just 23 runs in the first 14 overs as the home bowlers found prodigious movement. But after the drinks break there was a visible shift in mindset from the batsmen, who plundered 75 runs in the remaining 12.4 overs of the session. South Africa were able to beat the bat with fair regularity in the opening hour, but battled to create clear-cut chances, with Philander (one wicket for five runs in 7.4 overs) having two appeals for lbw turned down. Australia captain Steve Smith raised eyebrows at the toss with his decision to bat in what were clearly bowling conditions, but stated that if the batsmen could get through the first hour a big first innings score is on the cards. Australia won the first test in Durban by 118 runs. Australia kept an unchanged side for seventh test in a row, while South Africa made a single change, bringing in seamer Lungi Ngidi for the more experienced Morne Morkel. READ ALSO:
#Australia #South Africa #David Warner #TEST MATCH CRICKET
You May Also like: