Wawrinka through to quarters at US Open 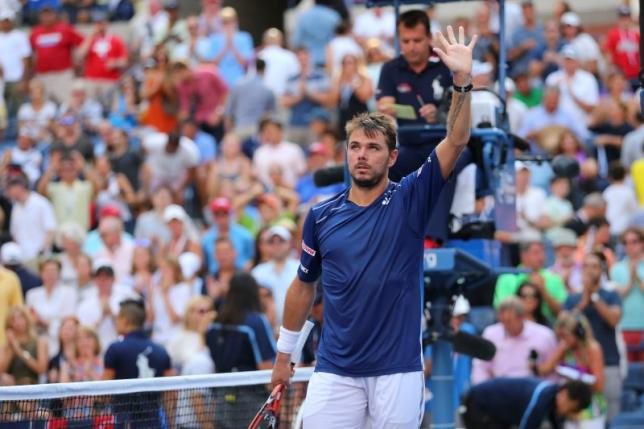 Sep 7, 2015; New York, NY, USA; Stan Wawrinka of Switzerland celebrates the win against Donald Young of the United States on day eight of the 2015 U.S. Open tennis tournament at USTA Billie Jean King National Tennis Center. Mandatory Credit: Anthony Gruppuso-USA TODAY Sports
NEW YORK: French Open champion Stan Wawrinka kept the pressure on to end the threat posed by Donald Young and register a 6-4 1-6 6-3 6-4 victory over the American to reach the quarter-finals at the US Open on Monday. Fifth seed Wawrinka stayed on track for a possible last eight clash against third seed Andy Murray, who was meeting big-serving South African Kevin Anderson in the fourth round. The Swiss shut the door on the 68th-ranked Young by not allowing the American to reach a single break point in the fourth set. The 26-year-old Young, regarded during his teenage years as the next great American men's player, had advanced to the fourth round with two epic wins from two sets down. "Some good moments on the court," said Wawrinka, who struck a massive 52 winners, including 11 aces, in the match. "Mentally I was there. It was a good win for me." Four years ago, Young beat Wawrinka in a fifth-set tiebreaker in the second round at the U.S. Open. "It's a long time ago," said Wawrinka, who since then has broken through on the grand slam stage, winning the 2014 Australian Open with victory over Rafa Nadal and beating world number one Novak Djokovic in the Roland Garros final this year. The 30-year-old Wawrinka said his victory over Young was his best match of the tournament so far and that he was pleased with how he bounced back after dropping the second set. "I think I start the third set really right again. I was physically there trying to play again more aggressive, the way I start the match also," he said. Young, who reached the final at Delray Beach and the semi-finals at Memphis earlier this year, said he was encouraged by his play at Flushing Meadows where he equalled his best grand slam result. "This was a good step in the right direction for me," Young said. "I think I'm a little more ready to be a little more consistent. "I feel like things are coming around. I really feel like I'm ready to do it on a consistent level and not just do it for a while or work hard for a little bit and then relax. I'm looking forward to keeping it going."
#Stan Wawrinka #French Open #US Open
You May Also like: