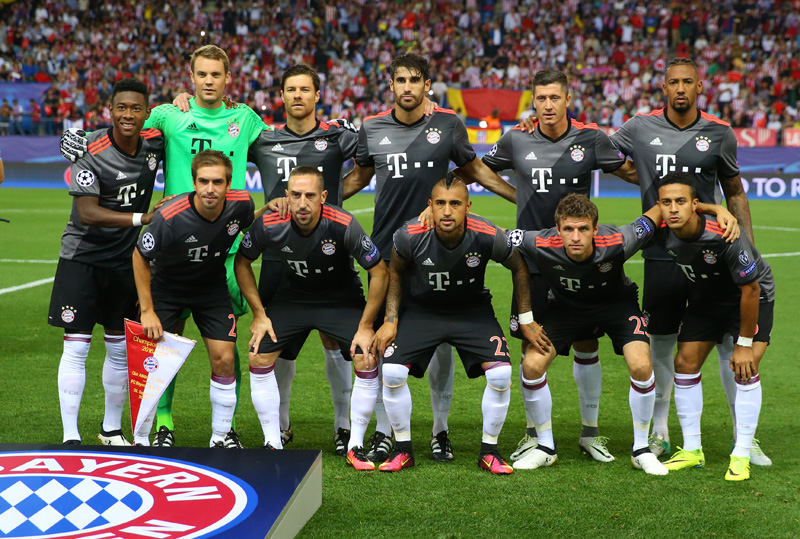 Bayern Munich's players pose for a team group before the match. Photo: Reuters
LONDON: Arsene Wenger feels guilty about Arsenal's Champions League failures and the Frenchmen is hoping a quote from the bible can act as inspiration when they face Bayern Munich in the round of 16. Arsenal will aim to reach the quarter-finals for a first time in seven seasons when they face Bayern in February and March, having lost twice to the Germans and Barcelona, and once each to AC Milan and Monaco in their last six campaigns. "We are all here to change history and to make history, so we have to change what happened before and make it better," the Arsenal manager told British media. "Look, the last six years we have not come past the last 16. They said that God made the world in seven days and this is the seventh day for us! So we have to get a special day." Arsenal hoped to avoid a European heavyweight after topping their group but were pitted against Bayern for the fourth time in five seasons when the draw was made on Monday. "I am responsible for the results so I don't want to escape when I don't meet the expectations of people who love this club," Wenger added. "You feel guilty because you always question yourself first and your decision making. I think that's completely normal." Despite Bayern's superior head-to-head record against Arsenal in recent seasons, assistant manager Paul Clement said he expected a tougher test but felt the hectic festive schedule will be the undoing of the English Premier League club. "Arsenal have got great players throughout... But we have a lot of very good offensive players too, so it'll be a very interesting tie. It's the biggest game of the round, for me," Clement told Talksport radio. "Bayern have had the upper hand against Arsenal recently, but this is a totally different season. It will be interesting going into February what the momentum of the two teams is -- that's important. "Arsenal are going to have a busy winter period and we have a four-week winter break, so hopefully we will be able to take advantage of that."
#Champions League #Premier League #Arsenal #Bayern Munich #Arsene Wenger
You May Also like: