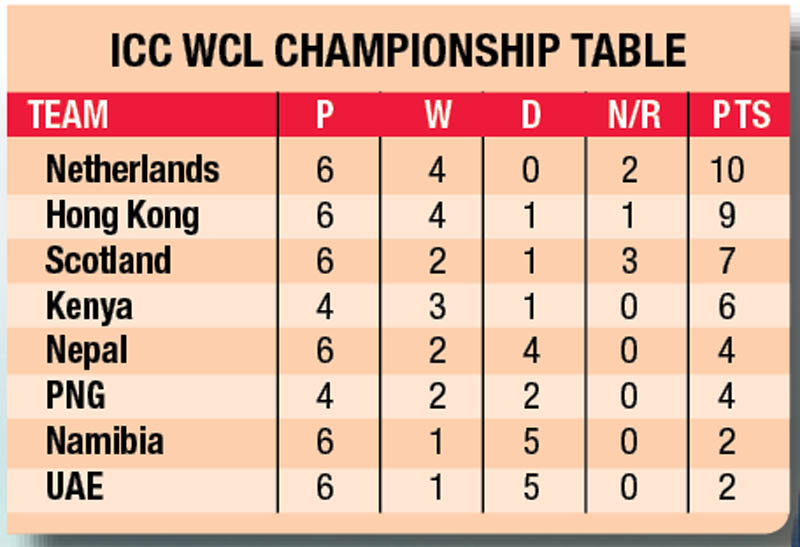 Kathmandu, April 18 Skipper Paras Khadka said the team’s victory was more important than the individual century after the ICC World Cricket League Championship third-round match here at the TU Stadium today. Nepal beat Namibia for their second straight victory to climb to fifth position in the table that features eight teams. Nepal, who lost their previous four matches against Scotland and Papua New Guinea, accumulated four points. Khadka led from the front scoring a brilliant century as Nepal chased down Namibia’s 239-9 with one ball remaining. The batsmen, however, made it difficult for themselves as the match went to the last over. “I was worried about the result as the team had lost the match when I scored my first century,” Khadka told reporters remembering the ACC Trophy Elite match against Kuwait in 2012. “It feels good to score a century in front of the home crowd. I had dropped two catches earlier and I had to do it. As a batting unit, I am glad that I could contribute towards the win. But the individual records are secondary as the team’s victory always comes first,” he added.

Khadka said he was happy to get two wins in two matches. “The wicket played very well and it was a good win especially chasing 240 runs,” said Khadka, who added 167 runs for the third wicket with Sharad Vesawkar. “We missed chances in the first innings and that cost us dear,” said Khadka, who had put down two catches at slip. “But we knew we could chase the total and two or three batsmen needed to keep the head down and bat,” he said. “Hats off to Sharad once again, he is always been there. He scored the winning runs in both matches and played crucial match-winning innings. I hope he continues doing it.” Nepal were cruising nicely needing 14 runs from the last five overs but the batsmen waited until the second last ball to finish it off. “I don’t know. May be it was exciting for the crowd but we were very nervous. As long as we win we take it, but we don’t want to be in such situation from next time.” Khadka said the target of the team was to finish in top four and the players needed to carry the momentum. “This is just the beginning. We have to finish in top four. Let’s hope we can continue this momentum, we have to keep pushing as all teams in Division-I are good and we have to play good cricket in every round,” he said. Coach Jagat Tamatta was satisfied with the overall performance of the team. “All the team members played their part and we got two wins in as many matches,” said Tamatta, who handled the national team for the first time as a head coach. “I am happy to get back to back wins with the national team. I had done it before with the U-19 teams and this was an opportunity for me. Thanks to the coaching staff and the players for helping me in fulfilling that,” added Tamatta praising skipper Khadka and Vesawkar. Asked about the panic at the later stage of the match, Tamatta said the team could have finish the match easily. “The players charged down and lost their wickets, which was not necessary at all.” Namibia skipper Stephan Baard said his team was very disappointed with the outcome of the matches. “We were outplayed in the first game, while we made it difficult for ourselves in the second match. Middle period failure let us down and we also could not hold on the chances that came our way,” said Baard, who was cheered by the crowd after he reached half century. “It’s been a great experience here. Nepali people are very friendly, they welcomed us nicely and they have been good to us as well.” Baard said they were going well at one stage. “I think there was a big loss of momentum in the middle period as we were reduced to 140-6 in 39 overs from 97 for no loss in 21 overs,” he said. Vesawkar said he was out of words to express happiness. “No words…I am extremely happy,” said Vesawkar. “This is one of my best innings as it was not easy to bat out there. And I was confident that I can do it as I have played under such situations so many times,” said Vesawkar. “Paras played exceptionally well and that relieved the pressure.” Vesawkar said he remembered the World Twenty20 qualifying match against Hong Kong, in which he scored the winning run in the last ball. “Today, I remembered god and I had already decided that I would play the shot on the fourth ball of the last over,” said Vesawkar, who had collected 12 out of 13 runs needed in the last over to qualify for the 2014 World Cup.