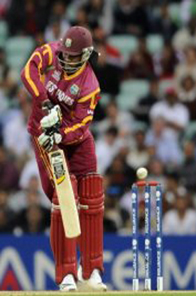 Gayle said he was proud that his team had reached the semi-finals Source: AFP

LONDON: West Indian captain Chris Gayle is not losing heart after the semi-final loss in the World Twenty20 and has vowed to bounce back in the upcoming one-day series against India.
The West Indies exited from the tournament on Friday after a stinging 57-run defeat by Sri Lanka at the Oval, but Gayle said he was proud that his team had reached the semi-finals.
"Of course we are disappointed because we too wanted to be in the final, but that does not take anything away from the way the team has played through this tournament.
"I am proud of the boys, they put everything into it. We backed ourselves and came this far. It is a great learning experience for the younger players in the team.
"If they learn the lessons quickly we should be able to capitalise in home conditions when the World Twenty20 is held in the Caribbean next year."
Gayle hoped West Indian fans were happy at the team's performance in the tournament after it was routed 2-0 in the preceding bilateral Test series against England.
"Fans are very hard to please," said Gayle. "They only want victory everytime. I just want to say tough luck to the fans. But I hope they will keep supporting us and stop cursing.
"I say to my fans that we will fly like a butterfly and sting like a bee, we'll be back. What can I do about it? Ask Muhammad Ali!"
The West Indies were outplayed on Friday after Tillakaratne Dilshan's unbeaten 96 in Sri Lanka's 158-5 was followed by an astonishing first over from rising fast bowler Angelo Mathews.
Mathews claimed three wickets in five balls as the Windies slipped to 1-3 and were shot out for 101 despite Gayle carrying his bat for an unbeaten 63.
"The three wickets in the first over set us back and we could not overcome that as we kept losing wickets regularly," said Gayle.
"You need partnerships in any form of the game, but this is especially true of Twenty20 cricket.
"All credit to Dilshan for the way he batted. I thought we had a good start to keep them down in the first six overs and Dilshan was their only batsman among the runs.
"He just did not give us a chance and helped set a decent total for Sri Lanka."
Gayle said he looked forward to the four one-day matches against India in the Caribbean starting later this month.
"We will get back home for a few days and start another series soon," the West Indian captain said.
"India may not have made the semi-finals here and we did, but we start from scratch and have to do all the hard work again.
"India is always a good one-day team, so it is bound to be a tough series."
Asked whether he will put his money on Sri Lanka or Pakistan in Sunday's final, Gayle quipped: "I am broke, maan!"
"But we can't ask for a better final. We have two quality teams and so it should be a quality final."

#Windies ready to sting India
You May Also like: