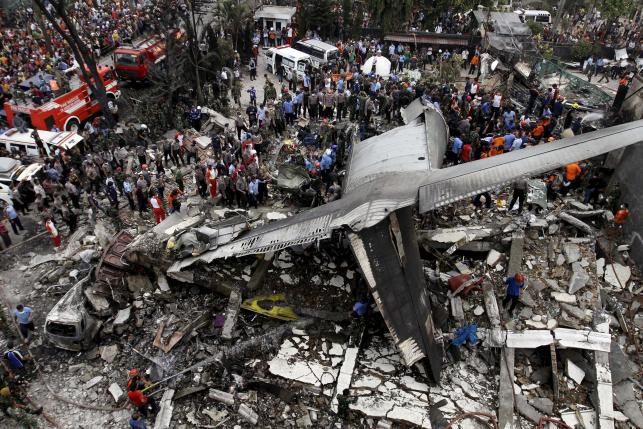 Security forces and rescue teams examine the wreckage of an Indonesian military C-130 Hercules transport plane after it crashed into a residential area in the North Sumatra city of Medan, Indonesia, June 30, 2015. REUTERS
MEDAN: An air force transport plane that crashed in Indonesia carried more passengers than previously reported, raising the death toll to more than 140 on Wednesday combined with a growing number of victims from the neighborhood where the aircraft went down. So far, 141 bodies have been recovered from the rubble of a residential area in Medan city, where the C-130 Hercules crashed shortly after takeoff on Tuesday, North Sumatra police Maj. A. Tarigan told TVOne station. The death toll rose from 74 late Tuesday evening. The air force says 122 people were on board, including military personnel and their families. Officials don't expect any survivors from the plane. Initially, the air force said there were 12 crew members on the C-130 and did not mention passengers. It then repeatedly raised the numbers of people aboard, indicating lax controls and raising questions about whether it was accepting paying passengers despite previous promises to crack down on the practice. Hitching rides on military planes to reach remote destinations is common in Indonesia, a sprawling archipelago that spans three time zones. The plane had traveled from the capital, Jakarta, and stopped at two locations before arriving at Medan on Sumatra, one of Indonesia's main islands. Dozens of family members gathered at Medan's Adam Malik hospital on Wednesday. Outside its mortuary, more than 100 wood coffins were arranged in rows and women cried and screamed the names of loved ones killed in the disaster. The hospital's director Yusirwan, who goes by one name, said more than two dozen victims have been identified by family. The crash of the aircraft, which had been in service since 1964, occurred only two minutes after it took off from Soewondo air force base in Medan, headed for the remote Natuna island chain. It plowed into a building that local media said contained shops and homes. Witnesses said flames and smoke streamed from the plane before it crashed. Air force chief Air Marshal Agus Supriatna has said the pilot told the control tower that he needed to turn back because of engine trouble and the plane crashed while turning right to return to the airport. At the crash site, a backhoe has been digging at the pile of smoldering concrete where the plane imploded. The tail still stands in the middle of the neighborhood. Indonesia has a patchy civil aviation safety record and its cash-strapped air force has suffered a series of accidents. Between 2007 and 2009, the European Union barred Indonesian airlines from flying to Europe because of safety worries. The country's most recent civilian airline disaster was in December, when an AirAsia jet with 162 people on board crashed into the Java Sea en route from Surabaya to Singapore. There have been five fatal crashes involving air force planes since 2008, according to the Aviation Safety Network, which tracks aviation disasters. President Joko "Jokowi" Widodo said he ordered the defense minister and armed forces commander to carry out a "fundamental overhaul" of the management of military weaponry. "We can no longer simply buy weapons, but should think to modernize our weapons systems" he told reporters in Depok, West Java.
#death toll #Indonesia #plane crash
You May Also like: