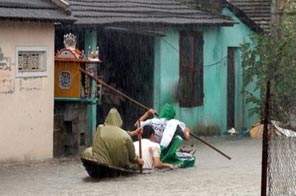 Residents travel by boat along a flooded alley in a village near the city of Hue as Typhoon Ketsana passes through central Vietnam. Typhoon Ketsana left a trail of destruction across Southeast Asia Wednesday, killing at least 49 people in Vietnam and Cambodia and churning towards Laos, officials said Source: AFP

HOI AN: Typhoon Ketsana left a trail of destruction across Southeast Asia Wednesday, killing at least 49 people in Vietnam and Cambodia and churning towards Laos, officials said.

Tens of thousands of people had fled their homes to escape flooding caused by Ketsana, which had already killed 246 when it struck the Philippines over the weekend as a weaker tropical storm. Related article: Philippines destruction

Floodwaters hit swathes of Vietnam including ancient UN World Heritage sites, and aid workers across the region were trying to evacuate stranded people and get supplies to other survivors.

The death toll in Vietnam rose overnight to at least 38 people with another 10 people missing, and could climb higher, said an official from the flood and storm control committee in the central Vietnam city of Danang.

Ketsana made landfall in Vietnam on Tuesday afternoon and weakened in the night to become a tropical depression which had reached the border of Laos early Wednesday, an official from the national storm centre in Hanoi told AFP.

There were no immediate reports of casualties in Laos, a government spokesman there said, but Cambodian police and government officials said at least 11 had died in that country's northeastern and central regions.

Chea Cheat added that at least 78 houses in his province were destroyed Tuesday evening and that heavy rain and rising floods were continuing.

International organisations and government officials in Cambodia said they were distributing tents and food while assessing damage across at least five of the country's provinces.

Central Vietnam bore the brunt of the typhoon's impact, with the country's flood and storm control committee saying that 168,585 people in six coastal provinces had been evacuated. Many areas were without power.

In Vietnam, the ancient town of Hoi An, a UNESCO World Heritage site close to the South China Sea, was flooded Wednesday morning, AFP reporters observed.

On Tuesday flooding hit parts of Danang as well as Hue, the former capital and another World Heritage site, where residents used small wooden and steel boats to move around.

"We will focus on rescuing those who are isolated," particularly in Kon Tum and Quang Ngai provinces, he said. "We have to immediately evacuate households on the banks of three rivers and areas that may suffer from landslides."

An update on the rescue effort was not immediately available Wednesday.

"We want the defence ministry to send armoured vehicles or trucks that can go in water to help people because we don't have enough boats," the chairman of the People's Committee in Kon Tum said Tuesday night.

#Cambodia #50 killed in Vietnam #Cambodia Typhoon kills 50 in Vietnam
You May Also like: