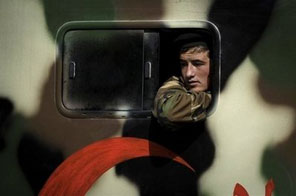 An Afghan army medic soldier looks out from an ambulance in Kabul. Seven members of the Afghan security forces were killed in a NATO air strike in remote western Afghanistan, the defence ministry has said. Source: AFP/Nicolas Asfouri

KABUL: Seven members of the Afghan security forces were killed in a NATO air strike in remote western Afghanistan, the defence ministry said on Saturday.

The statement comes as NATO's International Security Assistance Force (ISAF) said it was investigating an incident in Badghis province on Friday in which more than 25 international and Afghan forces were wounded.

Five of the 25 wounded were US soldiers, injured in what a Western military official, speaking anonymously, said was friendly fire.

However, ISAF spokesman Lieutenant Colonel Todd Vician, of the US Air Force, told AFP: "We have nothing to confirm friendly fire."

"No ISAF members were killed," he said, confirming that five injured ISAF soldiers were Americans.

Investigations into Friday's incident were ongoing and no further details were available, he said.

In what appeared to be a reference to the same incident, however, the Afghan defence ministry said members of the Afghan army and police had been killed.

"Due to a NATO forces air strike on November 6 in Badghis province seven Afghan security personnel (both Afghan army and national police) were martyred and also some were wounded," it said in a statement.

"The commando brigade informs us that foreign forces also sustained some casualties," it said.

The incident is believed to have taken place during a clash involving ISAF and Afghan soldiers searching for two paratroopers from the 82nd Airborne Division who went missing on Wednesday during a routine supply mission.

Local police said a party looking for the two missing soldiers clashed with Taliban and that alliance aircraft were called in to provide support.

The defence ministry made no reference to a clash between the joint forces and Taliban militants.

The Western military officer who spoke on condition of anonymity told AFP it appeared to be a "blue-on-blue incident," or friendly fire, with "a huge number of casualties."

NATO began its search operation in the barren, rugged area together with Afghan forces after the two paratroopers disappeared.

Afghan police said the two had drowned while trying to retrieve cartons of food that had been dropped into a river.

More than 100,000 troops under NATO and US command are in Afghanistan fighting a Taliban insurgency now at its deadliest in the eight years since US-led troops toppled the Islamist regime.

US President Barack Obama is currently considering a request from military commanders to boost troop numbers by up to 40,000, a decision not likely to be made public for a number of weeks.

As public support for the war wanes, Western leaders have criticised the government of President Hamid Karzai -- returned this week for another five years -- for lack of action on corruption.

But the foreign ministry in Kabul hit back on Saturday, saying comments by the UN special representative, British Prime Minister Gordon Brown and others that Karzai must pursue clean government policies were disrespectful.

"Over the last few days some political and diplomatic circles and propaganda agencies of certain foreign countries have intervened in Afghanistan's internal affairs by issuing instructions concerning the composition of Afghan government organs and political policy," it said.

"Such instructions have violated respect for Afghanistan's national sovereignty."

Separately, the Afghan army said a five-day operation that ended on Friday in northern Kunduz province had resulted in the deaths of 133 militants.

The Afghan army said at least three Afghan soldiers and more than a dozen Taliban militants were killed on Saturday in southern Afghanistan.

As Taliban activity across Afghanistan intensifies, UN chief Ban Ki-moon said about 200 UN expatriate staff would be temporarily relocated outside Afghanistan in the wake of a deadly rebel attack on a guesthouse on October 28 which killed five UN workers.

UN officials said another 400 expatriates were being relocated to safer sites within Afghanistan.

#7 killed in NATO air strike
You May Also like: