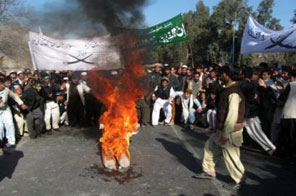 KABUL: A suicide bomber killed eight people and wounded 24 others in an eastern Afghan town on Thursday, an official said, hours after a provincial governor survived a blast in a nearby Taliban hotspot.
A bomber on foot detonated his explosives-filled jacket in front of a branch of the Kabul Bank in downtown Gardez, the capital of Paktia province, at 4:30pm (1200 GMT), said Rohullah Samon, a spokesman for the Paktia governor.
"This was a suicide attack. So far we know that eight people are dead, but that figure could change," he said, adding that the target appeared to be a private security convoy passing at the time.
"The head of a security company... was moving with his convoy (of vehicles) when he was attacked by a suicide bomber wearing a suicide vest," Samon said.
The dead included the security company manager, two of his guards, a butcher, two young girls and two other civilians.
"All were killed on the spot... 24 other civilians were wounded," he added.
Suicide attacks are a hallmark of the Taliban, who are waging an increasingly virulent insurgency aimed at toppling the Afghan government in Kabul and destabilising the rest of the impoverished country.
NATO and the United States have 113,000 troops deployed to help the government fight the militants, who are concentrated in the south and east of Afghanistan, but are spreading their footprint further north and west.
Another 40,000 troops are due to arrive in the country this year, and the Taliban have vowed to match the international surge with one of their own.
In recent weeks, attacks have escalated, with civilians bearing the greatest burden of Taliban tactics, which also include remote-controlled bombs.
The militant group claimed responsibility for the Gardez attack, and also an incident earlier Thursday when a bomb planted in a rubbish bin wounded the acting governor of eastern Khost province and six other officials.
"The explosives were placed in a dustbin behind the compound wall outside the governor's house," the interior ministry said in a statement.
Shards of glass injured seven people including acting governor Tahir Khan Sabari, the statement added.
A purported Taliban spokesman, calling himself Zabuhulla Mujahid and speaking by telephone from an undisclosed location, told AFP the militants were responsible for both the Gardez and Khost attacks.
"We detonated the bomb that hit the meeting hall of the governor's house in Khost," he said, later adding about Gardez: "We killed four people and wounded three, including the head of the security company."
Khost is on Afghanistan's southeastern border with Pakistan and sees a high rate of Taliban activity.
Seven CIA agents were killed there in a suicide blast on a US military base at the end of December, in an attack Al-Qaeda has hailed as "revenge" for the deaths of top militants in US drone strikes in Pakistan.
Afghan government officials are regular targets of attacks by the Taliban, who are trying to overthrow the fragile government of President Hamid Karzai.
In eastern Nangahar province, meanwhile, students took to the streets to protest against civilian deaths after an explosion there Wednesday killed four children and injured dozens of civilians and nine foreign soldiers.
Witnesses in Nangahar told AFP that hundreds of students from Nangahar University held a one-hour protest, during which they chanted "Death to Obama," "Death to America and "No more Christian invasion in Afghanistan".
The provincial governor's spokesman Ahmad Zia Abdulzai has said the explosion was caused by a roadside bomb planted by Taliban militants.
NATO's International Security Assistance Force (ISAF) said it was aware of the protests but insisted it was not responsible for the explosion.
"We continue to believe these casualties were not caused by ISAF operations," said Major General Michael Regner.