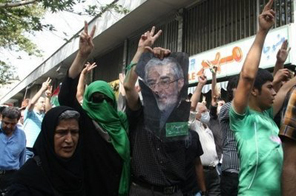 TEHRAN: Iranian opposition supporters fought running battles with riot police and hardliners on Friday as tens of thousands mounted the first protest in two months against the re-election of hardlinePresident Mahmoud Ahmadinejad.
Protesters defied dire warnings from top officials against demonstrating during the annual mass display of solidarity with the Palestinians that is one of the setpieces of the Islamic regime.
As Ahmadinejad himself gave the keynote speech at Tehran University renewing comments about Israel and the "myth" of the Holocaust that have sparked an international outcry, tens of thousands chanted "Death to the dictator" in nearby streets, witnesses said.
Shouting slogans in support of the hardliner's main challenger in the June 12 election, Mir Hossein Mousavi, the protesters gathered in major squares around the capital before heading to the university.
Hardline supporters of the regime among the more than 100,000 people who joined the Quds (Jerusalem) Day rally, mounted counter-demonstrations leading to repeated scuffles between the two sides, the witnesses said.
Riot police, armed with batons, beat protesters who were pelting them with stones in the central Haft-e Tir Square, witnesses told AFP.
Police fired tear gas to disperse the demonstrators who chanted: "Torture and rape are not effective any more," one witness said.
The demonstrators were referring to opposition allegations of abuses against some of the more than 4,000 activists and reformist politicians detained during the post-election disturbances.
The main opposition leader was forced to abandon plans to take part in the rally after an angry crowd of hardliners shouting "Death to the hypocrite Mousavi" attacked his car, the official IRNA news agency reported.
Former president Mohammad Khatami, a key supporter of Mousavi whose 1997 to 2005 term of office saw a thaw in relations with the West, was also assaulted by hardliners before being rescued by riot police, reformist website Parlemennews.ir said.
Khatami's brother Mohammad Reza Khatami said the former president was "not hurt".
"Some people shouted slogans against him," the brother told AFP. "He is home now. He is not hurt and he is fine."
The attacks on opposition leaders drew criticism from both within Iran and abroad.
"I don't accept such aggressions and illegal acts. I don't approve of them," said deputy parliament speaker Mohammad Reza Bahonar.
"France is highly concerned by reports of violence committed against leaders of the Iranian opposition," said foreign ministry spokesman Bernard Valero.
There were also reports of clashes at Quds Day events in other major cities, as the unrest over the presidential election flared up again for the first time since July 19 in a sign of the seriousness of the challenge facing the regime.
Members of Iran's Basij Islamic militia attacked and detained demonstrators in both Tabriz in the northwest and in Isfahan south of the capital, the Mowjcamp.com opposition website said.
State television played down the scale of the unrest. "A few demonstrators protested against Ahmadinejad but they were drowned in the massive crowds of people expressing solidarity with the Palestinians," it said.
The wave of protests came despite a threat from the elite Revolutionary Guards Corps to crush any renewed attempt to contest the official election results giving Ahmadinejad a landslide victory.
In his Quds Day address, the hardline president again described the mass extermination of Jews during World War II as a "myth" and said Israel was on its way to collapse.
"They (Western powers) launched the myth of the Holocaust. They lied, they put on a show and then they support the Jews," he said to chants of "Death to Israel" from his supporters among the crowd.
"The pretext for establishing the Zionist regime is a lie... a lie which relies on an unreliable claim, a mythical claim, and the occupation of Palestine has nothing to do with the Holocaust.
"This regime's days are numbered and it is on its way to collapse. This regime is dying."
Similar comments made by Ahmadinejad shortly after his first election as president in 2005 sparked an international outcry and prompted Israeli Prime Minister Benjamin Netanyahu to describe Iran as an "existential threat" to the Jewish state.