Ahmadinejad vows to work with House 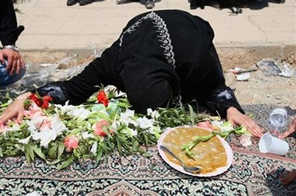 A woman mourns over the grave of relatives killed during June protests in Iran. An aide to Iranian opposition leader Mir Hossein Mousavi said in a website report posted Thursday that 72 people died in post-election violence, upping an earlier toll of 69 Source: Agencies

TEHRAN: President Mahmoud Ahmadinejad has pledged his future government will work closely with the parliament and has urged Iranian lawmakers to approve his choices for the Cabinet.
The remarks came as lawmakers prepared to vote Thursday on the 21-member Cabinet proposed by Ahmadinejad. The vote is the first significant test of his presidency since the disputed June presidential election.
Lawmakers have already questioned whether some nominees have enough experience and expertise for the posts.
The list is made up mostly new faces and also includes three women the first time women have been nominated for ministers since the 1979 Islamic Revolution.
Ahmadinejad told lawmakers ahead of the vote that their five-day debate on the Cabinet reflects "real democracy."

#Ahmadinejad vows to work with house
You May Also like: