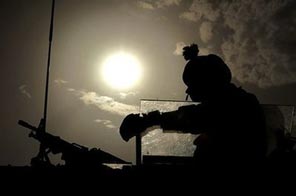 A British soldier during a patrol on the outskirts of Kabul in 2008. An airman has died in an explosion in southern Afghanistan, the Ministry of Defence announced on Friday. Source: AFP

LONDON: An airman has died in an explosion in southern Afghanistan, the Ministry of Defence announced on Friday.

The death of the member of 34 Squadron Royal Air Force Regiment brings the total number of troops who have died since operations against Taliban extremists began in 2001 to 219.

"The airman was killed as a result of an explosion that happened whilst on a force protection patrol near to Camp Bastion in central Helmand province, on the afternoon of October 1, 2009," the ministry said in a statement.

Britain has around 9,150 troops in Afghanistan, the vast majority in Helmand where they are battling Taliban insurgents.

#Airman killed in Afghanistan blast
You May Also like: