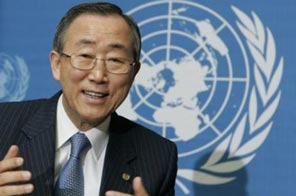 UNITED NATIONS: UN Secretary-General Ban Ki-moon on Sunday welcomed approval by Iraqi lawmakers of amendments to electoral laws, saying the move meant national parliamentary polls could be held in January as scheduled.
In a statement issued by his spokesperson, Ban said "this decision now paves the way for preparations for national elections to be held in January.
"These elections will be a crucial opportunity to advance national reconciliation and contribute to Iraq's political progress," the secretary-general added.
He appealed to all political blocs and their leaders to demonstrate "true statesmanship during the election campaign and participate in a spirit of national unity."
The election, due to be held in early 2010, is viewed as crucial to consolidating the war-torn nation's fledgling democracy ahead of a withdrawal of US combat troops by August and a complete pullout by the end of 2011.
The vote is set for January 16 but the date has been thrown into doubt because of delays and wrangling over the system to be used in what will be the second national poll since the ouster of dictator Saddam Hussein in 2003.
Ban reaffirmed the commitment of the United Nations to support Iraq's electoral commission tasked with organizing the ballot.
He also encouraged the Iraqi people "to participate in a process that will shape their country's future.'

#Ban welcomes Iraqi polls decisions
You May Also like: