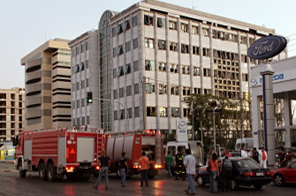 Firebrigade trucks are seen by the damaged Athens Stock Exchange building after a powerful bomb exploded there on September 2, 2009. Two homemade bombs went off early Wednesday in Athens and Thessaloniki, causing material damage and slightly wounding a woman, police said. The bomb in Athens exploded in front of the stock exchange after a warning call to a newspaper enabled police to cordon off the neighbourhood. A woman was slightly injured by breaking glass. The powerful blast in a stolen car destroyed six other vehicles and damaged the front of the stock exchange building. Source: AFP

ATHENS: A homemade bomb hidden inside a van exploded on Wednesday outside the Athens stock exchange in the latest of a series of attacks against financial targets in the Greek capital, police said.

A second homemade device also exploded in a phone box in the second city of Salonika although no group has yet claimed responsibility for either of the attacks, which both took place around dawn.

One woman was slightly injured in the attack in Athens which came after a warning had been phoned through to police. Officers were able to seal off the area but the chairman of the bourse said the bomb had caused widespread damage.

The device was detonated in a stolen van and destroyed six other vehicles as well as damaging the front of the stock exchange building on an avenue in the west of the Greek capital. Traffic was suspended for more than an hour after the device went off around 5:30am (0230 GMT).

However Athex did open for business as scheduled after employees had helped in a major clear-up effort.

"The market opened normally at 10:15. The damage is being evaluated," a bourse spokesman told AFP.

"We know for the moment that there is damage to a number of staff workstations and desks, but the core operations are up and running."

Television footage showed debris scattered in a wide area outside the bourse, whose exterior appeared largely intact apart from a number of smashed windows.

Two nearby car dealerships were also damaged in the explosion.

Police said the van had been stolen on Monday in another part of Athens.

Given the force of the blast, suspicion immediately fell on Greece's most dangerous extremist organisation Revolutionary Struggle.

The same organisation -- which is best known for a rocket attack on the American embassy in 2007 and features on the European Union's list of terrorist groups -- earlier this year placed a powerful car bomb outside the Athens headquarters of US banking group Citibank that was defused by police.

A month later, the group exploded another bomb outside a Citibank branch in the northern Athens suburb of Psychiko that caused significant damage.

Bombers also attacked a tax office in central Athens in July and a branch of Eurobank branch in the capital Athens in May.

An explosion also went off in April outside a building in Athens which housed a branch of Greek bank Alpha and the offices of Cetelem, a member of French banking group BNP Paribas.

Leftist extremists have also launched a number of attacks on police targets since riots last December triggered by the fatal shooting of a 15-year-old youth.

While bomb attacks against foreign and domestic banks and car dealerships have become more frequent in recent months, they are usually timed to avoid causing injury.

Also Wednesday, a smaller bomb went off in a phone box behind a government building in the northern city of Salonika, causing limited damage.

The bomb had been placed in a cooking pot, and police said it bore similarities to an explosive device placed outside the home of a former police minister in July by another underground group.

As with the attack in Athens, the bombing was preceeded by a warning call to local media.

#Blast rocks Athens stock exchange
You May Also like: