Blaze in A330 under probe 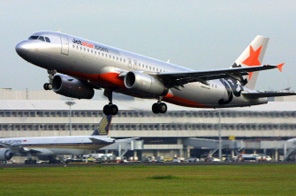 This file photo taken on October 25, 2007 shows a JetStar Airbus passenger jet taking off from the runway at Changi International Airlines in Singapore. Australian officials on June 11, 2009 investigated a mid-air blaze on a Jetstar Airbus A330-200 which forced a budget flight to make an emergency landing on a remote Pacific island, just days after an Air France tragedy involving the same model of plane. Smoke and then flames were seen near a cockpit window about four hours into Jetstar flight JQ20 from Osaka to Australia's Gold Coast, prompting flight crew to scramble to douse the fire before landing on Guam island. Source: AFP

GUAM: A mid-air fire forced an Australian budget airliner to make an emergency landing on a remote Pacific island Thursday, just days after 228 died in a mysterious accident involving the same type of plane.

Jetstar's flight JQ20 was about four hours into its journey from Osaka to the Gold Coast when the blaze broke out in the cockpit, prompting the captain to douse the flames with a fire extinguisher before diverting to Guam.

Nobody was hurt among the 203 mainly Japanese passengers and crew on board the Airbus A330-200, the same model as the Air France plane that went down over the Atlantic on June 1.

"The captain saw a small flame on the right-hand window and used a fire extinguisher to extinguish the flame," said Jetstar chief executive Bruce Buchanan, praising the pilot's quick reactions.

Australian officials were flying to Guam to probe the fire while Jetstar, operated by flag-carrier Qantas, was sending another A330 to pick up the passengers and crew.

"The passengers are safe. All regulatory agencies and emergency response team are assisting the airline and the passengers," said Rolenda Faasuamalie, spokesman for Guam's international airport.

One aviation expert said early suspicions would focus on a short-circuit in the cockpit window's heating system.

"These sorts of things just aren't supposed to happen. They will want to know why it happened," Geoffrey Thomas, senior editor of Air Transport World, told Sky News.

"It's exactly the same model as the Air France one, although different manufacturers provide different parts for these aircraft."

The Australian Licensed Aircraft Engineers Association said Qantas was "just lucky" the incident had not been more serious.

"This is the second cockpit smoke emergency landing on a Qantas group aircraft in 18 months, and in both cases the aircraft had undertaken maintenance in the cheaper overseas facilities," said federal secretary Steve Purvinas.

"The Qantas group are just lucky that these two cockpit smoke and fire incidents occurred in an area of the aircraft that is easily identifiable and accessible."

Airbus has stressed the safety of its A330s after the Air France tragedy, in which investigators believe an air-speed sensor fault may have caused the pilot either to fly too slow and stall, or too fast, ripping the plane's body apart.

Qantas this week said it had no plans to replace the air-speed sensors on its A330s as they are made by a different manufacturer.

It also rejected any link between the Air France accident and October's mishap when a Qantas A330 went into two sudden and steep dives over Western Australia, causing several serious injuries and prompting an emergency landing.

#Blaze in A330 under probe
You May Also like: