British politicians hit the campaign trail for May 6 poll 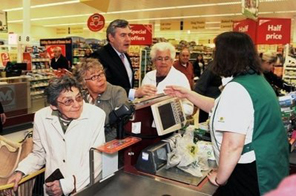 British Prime Minister Gordon Brown (C) meets members of staff and customers at a supermarket in Rochester, Kent. Britain entered its first full day of campaigning Wednesday for a May 6 general election, with party leaders set for a final parliamentary showdown ahead of the vote Source: AFP

LONDON: Britain entered its first full day of campaigning Wednesday for a May 6 general election, with party leaders set for a final parliamentary showdown ahead of the vote.

Prime Minister Gordon Brown fired the starting gun on the month-long campaign Tuesday, announcing the widely-anticipated date and triggering what commentators believe could be the closest poll race for a generation.

Brown, who leads the ruling Labour Party, and David Cameron, leader of the main opposition Conservatives, swung into action immediately, racing to key battlegrounds across the country.

The leaders will face off in the final weekly Prime Minister's Questions (PMQs) session in parliament before voters go to the polls, each man hoping to make his mark.Profile: Gordon Brown

Brown's centre-left Labour faces a tough battle over the next few weeks to claw back ground from Cameron's centre-right Conservatives, who lead in opinion polls.

A Labour victory would secure the party's fourth consecutive term in office and would be a first victory under Brown, who took over as leader from Tony Blair in 2007. The Tories are seeking their first win since a surprise 1992 victory.

The campaign will continue its frenetic pace after the House of Commons clash, with Cameron heading to the northwest of England, where he will visit a local business and attack Labour tax plans.

Brown meanwhile will field queries from members of the public submitted via email or Twitter, in a session his party has dubbed "people's PMQs."

The parties sprinted off the blocks after the campaign was officially launched Tuesday, with Brown heading to key seats in Kent, southeast England, and Cameron hitting the campaign trail by bus, train and aeroplane.Profile: David Cameron

As the election takes over political life in Britain, Brown decided Tuesday not to attend a nuclear security summit in the US next week as he would be campaigning, a spokesman for his office said. Foreign Secretary David Miliband would go in his place, added the spokesman.

Announcing the election date, Brown put Britain's economic recovery at the heart of Labour's campaign, and warned it could be at risk if the Conservatives took power.

"Britain is on the road to recovery and nothing we do should put that recovery at risk," he told reporters.

In a contest likely to be dominated by the economy, Brown, 59, is contrasting his role in steering Britain to safety after the global financial crisis with what he says is 43-year-old Cameron's inexperience.

Cameron, who has sought to extensively modernise the party of Margaret Thatcher since becoming leader in 2005, called it "the most important general election for a generation".

Cameron wants swift cuts to public services but Brown says these must be delayed to protect the fragile recovery.

Polls suggest the election will be the closest for a long time.

The Conservatives held a double-digit opinion poll lead for much of Brown's premiership but that fell to single figures after January's announcement that Britain had emerged from its worst recession since World War II.Chronology: Key dates in Brown's premiership

The Conservatives need a huge swing of 6.9 percent to secure outright victory with an overall majority -- equivalent to the landslide which swept Labour led by Blair to power in 1997.

Labour currently has 345 seats in the House of Commons, a working majority of 56, compared to the Conservatives' 193.

If there is a hung parliament -- where no one party has an overall majority -- for the first time since 1974, the Liberal Democrats could play a key role in a minority or coalition government.

#British politicians hit the campaign trail for May 6 poll
You May Also like: