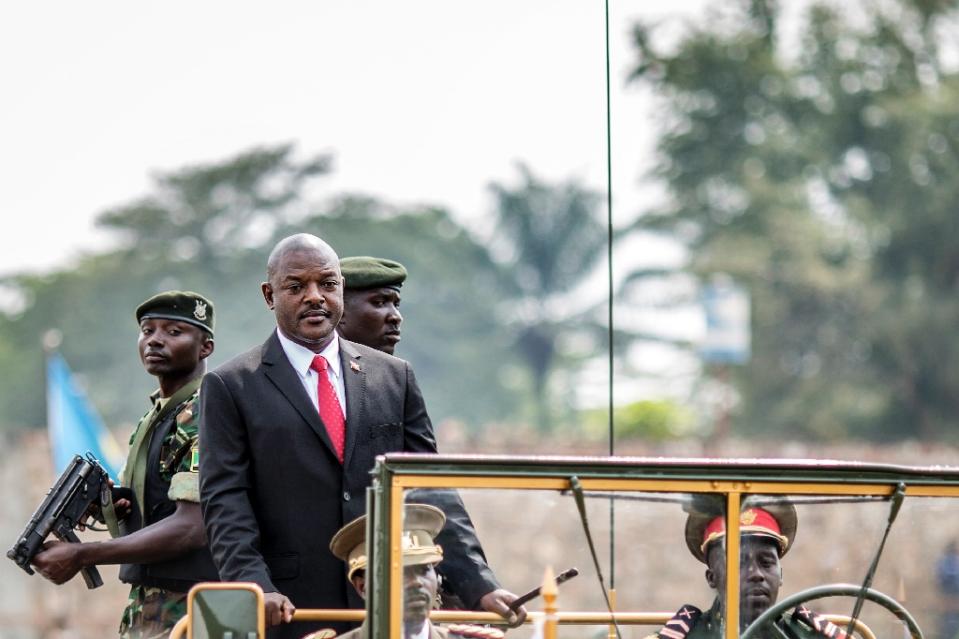 Burundi's President Pierre Nkurunziza (2nd L) arrives in a car for celebrations of the country's 53rd Independence Anniversary at Prince Rwagasore Stadium in Bujumbura on July 1, 2015. Photo: AFP
Dar es Salaam: Burundi's embattled president skipped key regional talks Monday, staying at home to campaign for a controversial third term as a rebel general threatened to step up attacks. The crisis in the central African nation surrounds President Pierre Nkurunziza's bid to stand for a third consecutive five-year term in office, a move branded by opponents as unconstitutional and a violation of a peace deal that brought an end to years of civil war in 2006. Leaders of the five-nation East African Community (EAC) bloc had been due to meet Monday in the Tanzanian city of Dar es Salaam, but Nkurunziza instead sent his foreign minister. Nkurunziza stayed in Burundi to lead his presidential campaign in the central Mwaro and Gitega regions. Meanwhile rebel general Leonard Ngendakumana, who took part in a failed coup in May, has vowed further attacks until the government is overthrown. "After we saw that we could not succeed our coup on May 15, we found it was necessary to keep fighting so that we can push Nkurunziza to keep thinking about what he is doing and maybe just resign," Ngendakumana told Kenya's KTN news channel in an interview broadcast late Sunday. "All those actions that are going on in the country, we are behind them and we are going to intensify them until Pierre Nkurunziza understands that we are there to make him understand by force that he has to give up his third term." 'Widespread fear' General Ngendakumana, a top intelligence officer, is an ally of coup leader General Godefroid Niyombare, who has been on the run since their attempt to seize power was thwarted. Over 70 people have been killed in more than two months of protests, with almost 144,000 refugees fleeing to neighbouring countries. "There was a need to organise that coup to make a change in the country because the situation was very bad," Ngendakumana said. "Mr Nkurunziza and his team were leading the country in a situation of civil war, and we could not accept that our population, our country, were led into a civil war." "They are trying to move towards an open civil war just to find a way to protect themselves," Ngendakumana said. Parliamentary and local elections held last Monday were boycotted by the opposition, and the UN electoral observer mission said the polls took place "in a climate of widespread fear and intimidation". Results are yet to be released. Presidential polls are due on July 15 followed by senatorial elections on July 24. There are fears the current crisis could plunge the impoverished, landlocked country back into civil war. During an EAC summit on May 13, army officers staged a failed bid to unseat Nkurunziza while the president himself attended the talks. Nkurunziza did not attend a second summit on May 31. The EAC bloc includes Burundi, as well as Kenya, Rwanda, Tanzania and Uganda. But Rwandan President Paul Kagame, who has called on Nkurunziza to step down from power, is also not attending Monday's meeting, officials in Kigali said. Host President Jakaya Kikwete of Tanzania, as well as Ugandan President Yoweri Museveni were due to attend, along with regional foreign ministers.
#Burundi #Burundi’s President Pierre Nkurunziza
You May Also like: