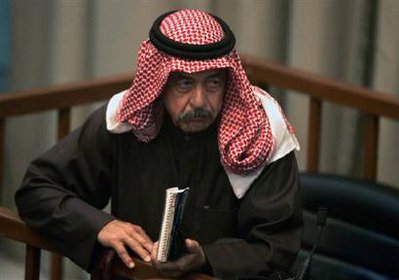 Ali Hassan al-Majeed, better known as "Chemical Ali," listens to the prosecution during the "Anfal" genocide trial in Baghdad in this December 18, 2006 file photo. Source:

BAGHDAD: Iraq's government spokesman says Saddam Hussein's notorious cousin "Chemical Ali" was executed Monday about a week after being sentenced to death for the poison gas attacks that killed more than 5,000 Kurds in 1988.

News of the hanging came shortly after three suicide car bombs struck downtown Baghdad. It was not immediately clear whether the attacks were linked the execution of Ali Hassan al-Majid.

Al-Majid — widely known as "Chemical Ali" for the gas attacks — was convicted on Sunday for ordering the poison gas to be dropped on the Kurdish town of Halabja in 1988 as part of a campaign against a Kurdish uprising.

It was the fourth death sentence against him for crimes against humanity.

#Chemical Ali executed in Iraq
You May Also like: