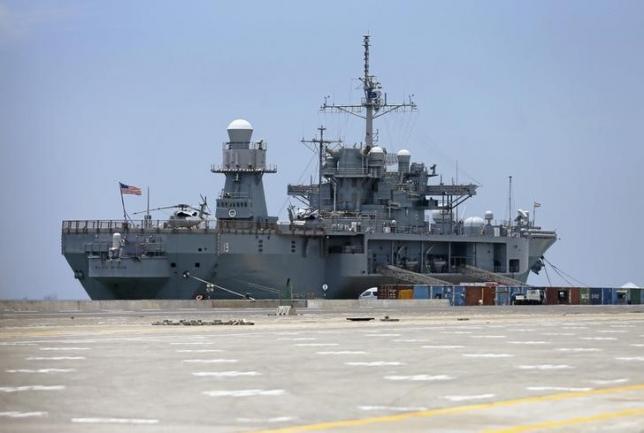 US 7th Fleet flagship USS Blue Ridge is seen at Colombo port in Sri Lanka March 30, 2016. REUTERS
WASHINGTON/HONGKONG : China has denied a request for a US carrier strike group led by the USS John C. Stennis to visit to Hong Kong, the US Defense Department said on Friday, amid heightened tensions over China's territorial claims in the South China Sea. A Pentagon spokesman, Commander Bill Urban, said a US warship, the USS Blue Ridge, was currently in Hong Kong on a port visit and the United States expected that to continue. Urban said the request for the Hong Kong visit by the carrier and its accompanying vessels, which have been patrolling the South China Sea, was recently denied, despite a "long track record of successful port visits to Hong Kong." A US Navy official, who did not want to be identified, said the Chinese Foreign Ministry's commissioner in Hong Kong conveyed Beijing's denial of visit, saying it was "not convenient" at this time. The Chinese government and its embassy in Washington did not immediately respond to requests for comment. The nuclear-powered Stennis has been conducting patrols in the South China Sea, which China claims most of and where Beijing has sparked US and regional concerns by building artificial islands to bolster its claims. US Defense Secretary Ash Carter visited the Stennis while it transited the South China Sea on April 15 to underscore US concerns about the need to maintain freedom of navigation in the face of Chinese moves. A wide range of US military vessels and aircraft have long routinely stopped in Hong Kong, a reflection of the "one country, two systems" formula under which Britain handed the global financial hub back to China in 1997. The visits occasionally have been suspended in periods of heightened tensions, such as after a mid-air collision between a US EP-3 surveillance plane and a Chinese plane off China's Hainan island in 2001. The USS Kitty Hawk aircraft carrier also was denied permission to enter Hong Kong over Thanksgiving in 2007 but was cleared to visit five months later. The Navy official said a visit by the USS Halsey also was denied in 2014. The United States has stressed the importance of good relations with China's military to avoid misunderstandings and Chinese military officers are invited routinely aboard US ships during port visits, and are sometimes flown out to land on US carriers at sea. While aboard the Stennis, Carter dismissed China's characterization of a more robust US military presence in the region as being the cause of heightened tensions. Washington has in turn accused China of militarising its outposts in the South China Sea by building airstrips and other facilities. Carter made a similar stop at the USS Theodore Roosevelt in November as it transited the South China Sea near Malaysia. The Stennis has been on a routine deployment in the Western Pacific for more than three months, the carrier strike group's commander, Rear Admiral Ronald Boxall, said earlier this month.
#United States #Hong Kong #China #Pentagon
You May Also like: