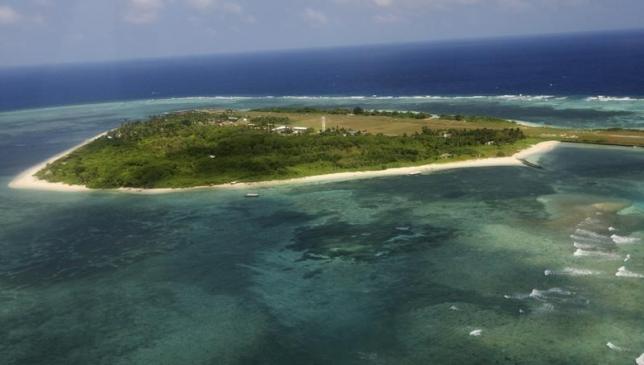 An aerial view shows the Pagasa (Hope) Island, part of the disputed Spratly group of islands, in the South China Sea located off the coast of western Philippines July 20, 2011. REUTERS
WASHINGTON: The Chinese military has deployed an advanced surface-to-air missile system to one of its contested islands in the South China Sea, Fox News reported on Tuesday, citing civilian satellite imagery. The images, from ImageSat International, show two batteries of eight surface-to-air missile launchers as well as a radar system on Woody Island, part of the Paracel Island chain in the South China Sea, according to Fox News. Woody Island is also claimed by Taiwan and Vietnam. Bill Urban, a Pentagon spokesman, said: "While I cannot comment on matters related to intelligence, we do watch these matters very closely." The report comes as US President Barack Obama and leaders of the Association of Southeast Asian Nations concluded a summit in California. At a news conference following the summit, Obama said he and the Southeast Asian leaders discussed the need to ease tensions in the South China Sea, and they agreed that any territorial disputes there should be resolved peacefully and through legal means. A US Navy destroyer sailed within 12 nautical miles of Triton Island in the Paracel chain last month in a move the Pentagon said was aimed at countering efforts by China, Vietnam and Taiwan to limit freedom of navigation. China condemned the US action as provocative. The missiles arrived at Woody Island over the past week, Fox News said. According to the images, a beach on the island was empty on Feb. 3, but the missiles were visible by Feb. 14, it reported. A US official confirmed the accuracy of the photos, Fox News said. The official said the imagery viewed appears to show the HQ-9 air defence system, which has a range of 125 miles (200 km) and would pose a threat to any airplanes, civilian or military, flying close by, according to Fox News. Over the weekend, The Diplomat magazine reported that China was building a helicopter base at Duncan Island in the Paracel chain. A State Department spokeswoman responded to the Diplomat report by calling on all claimants to the islands to halt construction and militarization of outposts.
#China #Missiles #South China Sea
You May Also like: