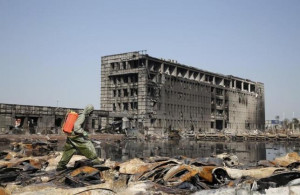 A People's Liberation Army (PLA) soldier of the anti-chemical warfare corps in protection suit sprays liquid on the debris at the site of blasts in Binhai new district of Tianjin, China, August 21, 2015.
BEIJING: Chinese authorities in Tianjin will build a monument to commemorate the 160 people killed in two explosions in the north-eastern port city last month, state media said on Saturday, citing local officials. Along with the monument, to be built as part of a park, there are plans for new primary schools and kindergartens, said the Binhai New Area Planning and Land Resources Administration, according to the official Xinhua news agency. Other industrial explosions have since claimed lives in China. The frequency of industrial accidents and the deadliness of the Tianjin blast at a hazardous chemicals warehouse; have raised questions about safety standards following three decades of breakneck economic growth.
#China #Xinhua news agency #Tianjin blast #breakneck economic growth #kindergartens
You May Also like: