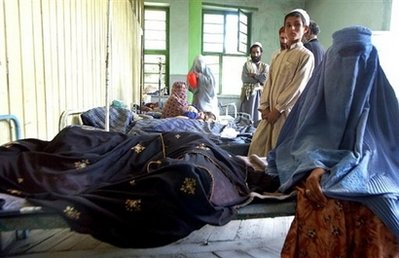 Cholera patients wait for a doctor at a Kabul hospital in 2002l. Afghanistan has reported outbreaks of potentially lethal cholera in 10 provinces across the impoverished country. Source: AFP

KABUL: Afghanistan has reported outbreaks of potentially lethal cholera in 10 provinces across the impoverished country, the health ministry said on Sunday.
The ministry "has so far recorded 673 cases countrywide" of the highly contagious disease in almost a third of the country's 34 provinces, including in the capital Kabul. No deaths have been reported.
"All outbreaks are under control and no active one is reported as of today, September 13," a ministry statement said.
It said staff had been deployed to outbreak areas and medication was being provided to try to prevent the spread of the disease, which thrives where sanitation is poor and can spread rapidly.
Afghanistan's health system has been battered by decades of civil war, and facilities remain poor across the fifth poorest country in the world.

#Massive cholera outbreak in Afghanistan
You May Also like: