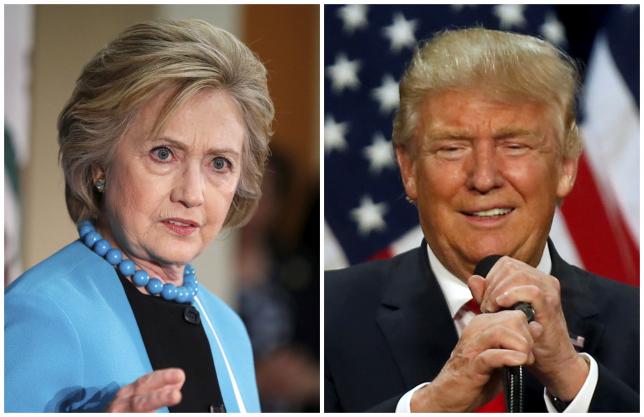 A combination photo shows US Democratic presidential candidate Hillary Clinton (L) and Republican US presidential candidate Donald Trump (R) in Los Angeles, California on May 5, 2016 and in Eugene, Oregon, US on May 6, 2016 respectively. REUTERS
NEW YORK: Democratic presidential nominee Hillary Clinton extended her lead over Republican rival Donald Trump to eight percentage points, according to a Reuters/Ipsos poll released on Tuesday, from six points on Friday. The bump for Clinton followed the Democratic National Convention in Philadelphia last week at which Clinton and her supporters painted an optimistic portrait of America, and came amid controversy over Trump's comments about the parents of a slain Muslim US soldier. About 43 percent of likely voters favour Clinton, 35 percent favour Trump, and 9 percent picked "Other," according to the July 28-Aug. 1 online poll of 1,289 likely voters. The poll had a credibility interval of 3 percentage points. Trump has faced a barrage of criticism in recent days from political allies as well as opponents after he criticized the parents of US Army Captain Humayun Khan, who was killed in Iraq in 2004. The father, Khizr Khan, had harsh words for Trump at the Democratic convention where he spoke on Thursday night, saying the 70-year-old businessman and former reality TV star had "sacrificed nothing and no one" and railing against his calls to ban Muslim immigrants. Trump responded saying Khan "viciously attacked" him, and suggested the man was repeating lines fed to him by the Clinton campaign. New Jersey Governor Chris Christie, who dropped out of the Republican presidential primary race and endorsed Trump, said on Tuesday that Trump's criticisms of the Khans was "inappropriate." House Republican Richard Hanna of New York said it was "not enough to simply denounce his (Trump's) comments," and said he would support former Secretary of State Clinton instead. Trump had a short-lived bump in the polls after the Republican National Convention in Cleveland in late July, when Reuters polling showed him slightly ahead of Clinton for the first time since May.
#United States #Hillary Clinton #Donald Trump #Philadelphia #Democratic National Convention
You May Also like: