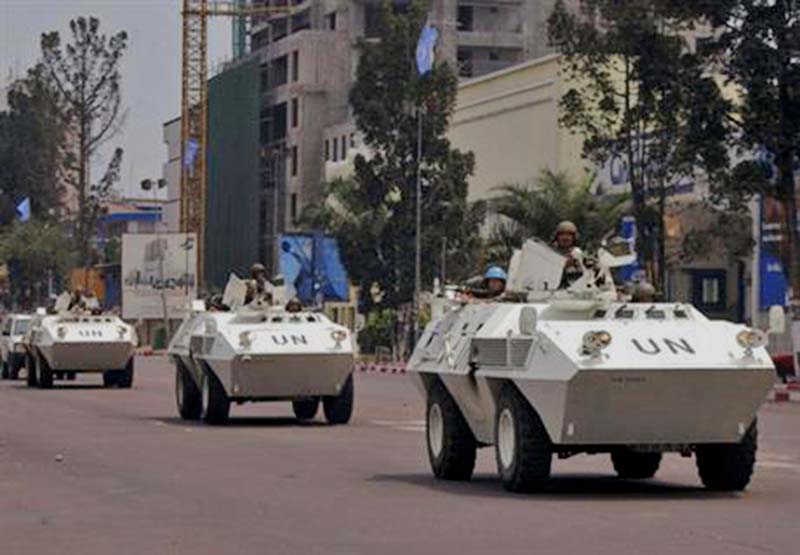 UN troops in armored vehicles drive through the streets of Kinshasa, Congo, on Monday, August 21, 2006. Photo: AP
BENI: A Congolese militia group has decapitated 42 policemen after ambushing them in an increasingly violent region where the UN is searching for missing American and Swedish investigators, a local official said Saturday. Members of the Kamwina Nsapu militia staged the attack between the cities of Tshikapa and Kananga in Central Kasai province on Friday, according to Kasai Assembly President Francois Kalamba. The militia members freed six policemen because they spoke the local Tshiluba language, he said. Kasai Gov. Alexis Nkande Myopompa said investigations were underway. Large-scale violence erupted in the Kasai region in August when security forces killed the militia's leader. More than 400 people have been killed and more than 200,000 displaced since then, according to the UN The UN in recent days reported the discovery since January of more than two dozen mass graves in three Kasai provinces. And five videos have emerged in recent weeks that appear to show Congolese soldiers firing on militia members. While the violence is linked to local power struggles, there are also clear ties to Congo's political crisis, according to Human Rights Watch. Anger has been growing in the country at long-delayed presidential elections, and dozens were killed in December amid protests as President Joseph Kabila stayed on past the end of his mandate. A deal reached between the ruling party and opposition to hold elections by the end of this year, without Kabila, remains fragile as the UN urges its implementation. Security forces have been known to back local leaders seen as loyal to Kabila, while militia groups support those who are believed to support the opposition, the rights group said. Militia members have recruited large numbers of children and used crude weapons to attack security forces and some government buildings in Kasai, Kasai Central, Kasai Oriental, Sankuru, and Lomami provinces, Human Rights Watch said. The decapitations were announced as the rights group on Saturday called on Congo's government to cooperate with UN efforts to locate experts, including an American and a Swede, who have been missing in the Kasai region for nearly two weeks. The UN peacekeeping mission in Congo said its movements have been restricted by security forces in Kananga, the provincial capital of Kasai Central. Michael Sharp of the US, Zaida Catalan of Sweden, interpreter Betu Tshintela, driver Isaac Kabuayi and two motorbike drivers went missing March 12 near a remote village south of Kananga. They were looking into recent large-scale violence and alleged human rights violations by the Congolese army and local militia groups. Their disappearance is the first time UN experts have been reported missing in Congo, Human Rights Watch said, and it is the first recorded disappearance of international workers in the Kasai provinces. "The missing UN team reflects a bigger picture of violence and abuse in the Kasai region," said Ida Sawyer, Central Africa director at Human Rights Watch. She called on the UN Human Rights Council to establish a commission of inquiry into abuses there. Parts of Congo, particularly the east, have experienced insecurity for more than two decades since the end of the Rwandan genocide led to the presence of local and foreign armed militias, all vying for control of mineral-rich land. But the Kasai Central province where the UN experts were abducted represents a new expansion of tensions.
#United Nations #Congo #Congolese militia group #decapitated #American and Swedish investigators #Kamwina Nsapu militia #Tshikapa #Kananga #Central Kasai province
You May Also like: