Cuba opts to stay out of OAS 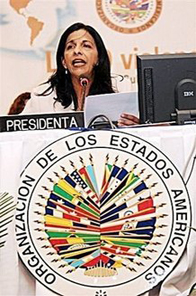 HAVANA: Cuba is formally rejecting an offer to rejoin the Organization of American States, echoing the sentiments of Fidel Castro who has long maintained his island has no use for the group.
The OAS voted last week to lift a decades-old suspension of Cuba's membership. A statement published Monday in the communist newspaper Granma says the government is satisfied "with this expression of sovereignty and community" but repeats that Cuba "will not return to the OAS."
It said the OAS has long supported Washington's hostility toward Cuba and that this country prefers to retain its independence.
The U.S. supported the move to lift the suspension of Cuba's membership.

#Cuba opts to stay out of OAS
You May Also like: