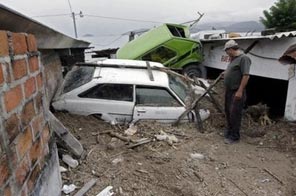 A man looks at cars damaged in a landslide east of San Salvador on November 8. A late-season storm has ravaged parts of Central America as floods and landslides killed at least 124 in El Salvador, where the president declared a state of emergency, and thousands were left homeless in Nicaragua. Source: AFP

SAN SALVADOR: A late-season hurricane ravaged parts of Central America on Sunday as floods and landslides killed at least 124 in El Salvador, where the president declared a state of emergency, and thousands were left homeless in Nicaragua.

Hurricane Ida, which grew to a category two storm Sunday, was moving into the southern Gulf of Mexico but local officials said it had caused no casualties or damage to infrastructure in the popular tourist resort city of Cancun.

Forecasters at the Miami-based US National Hurricane Center said Ida had strengthened packing top wind speeds of 100 miles (160 kilometers) per hour as it moved over Mexico's Caribbean coast.

Civil Defense chief Jorge Melendez added that "there could be more fatalities" in the eastern regions of Verapaz and Tepetitan.

In Tepetitan, landslides and overflowing rivers carried away some 30 houses, authorities said. Some residents had agreed to evacuate the area, but a number "refused to leave their homes," according to mayor Ana Jovel.

In Verapaz, 71 miles (114 km) southeast of the capital San Salvador, officials reported a raging torrent of mud, rocks and tree trunks ripping through a whole section of the town, burying houses and cars.

A dozen bodies of victims were hauled from the devastation to a local chapel and covered with white sheets, caked with mud, as they awaited identification by relatives.

El Salvador has been on a state of alert since Thursday as heavy rains associated with Ida began to affect the region, destroying an estimated 930 homes and leaving some 13,000 people homeless in Nicaragua.

On Saturday, Nicaragua's President Daniel Ortega said his government hoped to make available up to 4.4 million dollars in aid for those affected by the storm.

At 0001 GMT on Monday, the National Hurricane Center said Ida was about 140 miles (225 km) west-northwest of the western tip of Cuba, moving near 12 miles (19 kilometers) per hour.

The center said the storm, currently a category two on the Saffir-Simpson scale, strengthened with sustained winds near 105 mph (165 km/hr) but was forecast to weaken on Monday, the NHC said.

A hurricane watch has been issued for parts of the Yucatan Peninsula, as well as for the area east of the Mississippi-Alabama border through the northwest area of Florida.

The NHC stressed the hurricane watch does not cover the city of New Orleans, which was devastated in 2005 by Hurricane Katrina.

Forecasters warned Ida could dump between three to five inches of rain in the Yucatan and western Cuba, with up to eight inches in some places, as well as storm surges and "large and destructive waves."

This year, the Pacific's El Nino ocean-warming phenomenon has resulted in an especially calm Atlantic hurricane season -- a welcome respite for Caribbean and southeastern US residents still smarting from a 2008 pounding.

There have only been two other hurricanes in the 2009 Atlantic season, which runs from June 1 to late November 30.

#Disaster kills 124 in El Salvador
You May Also like: